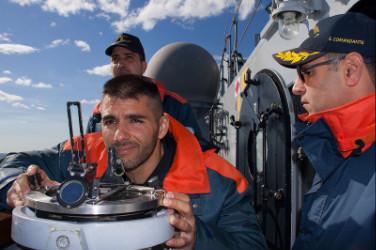 After three weeks of maneuvering in the Augusta harbor and one in the open sea, the first phase of the "Tactical" training session of the 263 ^ Naval Command School, an institution that has been preparing officers for more than eighty years, has just ended. of the Navy to the naval command.

Three corvettes engaged in training, Urania, Sphinx e Fenice, of the Command of the Patrol Forces for Coastal Surveillance and Defense (COMFORPAT). The ships left Augusta on 11 February with 12 lieutenants on board who, in a few months, will assume their "First Command".

After five days lived very intensely, maneuvering in close formation in the eastern waters of Sicily, the ships stopped, from 14 to 17 February, in the port of Palermo. The visit of the Command School in the Sicilian capital offered a precious opportunity for exchange with local authorities and the population.

During the stop, the commander of the southern military region, Corrado Dalzini, on board the Sphinx ship, talked to the lieutenants about his experience in command.

Among the numerous visitors who boarded the ships during the weekend, almost seven hundred people, a group of students met the future captains who talked to the young people about their experience in the Navy and answered the questions of the boys. The ships have left Palermo and will continue to train in the Tyrrhenian Sea before reaching Naples on 21 February.

On Friday 27 January, the visit of the Undersecretary of State for Defense Dr. Matteo Perego of Cremnago took place...
713
Read

After a sleep that lasted about half a million years, a paleontological find has come to light among the soil...
2935
Read

On January 9, the Italian ambassador in Abu Dhabi Lorenzo Fanara attended the greeting ceremony at the...
810
Read

The Director of Naval Armaments (Navarm) of the General Secretariat of Defense and National Directorate of ...
4659
Read