Bahrain delegation on board the ship Cigala Fulgosi 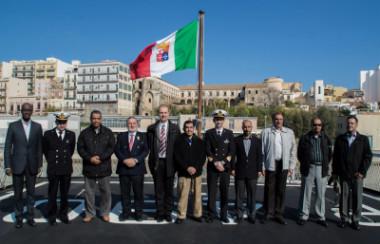 An official 6 delegation of the Navy of the Kingdom of Bahrain visited the patrol boat Comandante Cigala Fulgosi, moored in the naval base of the Navy of Augusta, as part of a program of collaboration in the defense between Italy and Bahrain, aimed at providing some systems already embarked on the units of the Italian Naval Squadron.

The captain of frigate Riccardo Del Bianco, commander of Nave Cigala Fulgosi, supported for the occasion by the engineer Gennaretti of the Selex-es companies, welcomed the delegation presenting the characteristics of the OPV (Offshore Patrol Vessel) of the Navy, and highlighting the potential of the "Comandanti class" and in particular of the "NA 25 x" shooting radar, installed on board and the result of the Italian industry Selex-es.

The delegation then witnessed an effective demonstration on the operation of the shooting radar, tracking and acquiring naval and air targets with subsequent designation to the main caliber of the unit.

On Friday 27 January, the visit of the Undersecretary of State for Defense Dr. Matteo Perego of Cremnago took place...
684
Read

After a sleep that lasted about half a million years, a paleontological find has come to light among the soil...
2927
Read

The offshore patrol vessel Commander Foscari, after having cast off the moorings from the Augusta Naval Base the days ...
576
Read

The Director of Naval Armaments (Navarm) of the General Secretariat of Defense and National Directorate of ...
4652
Read

After a night of voting in the House Budget Committee, an amendment was approved to the proposed...
4430
Read

With the end of the PIA - Pooling Implementing Arrangement - signed in 2018 by the Defense and the US Marine Corps and the...
13174
Read