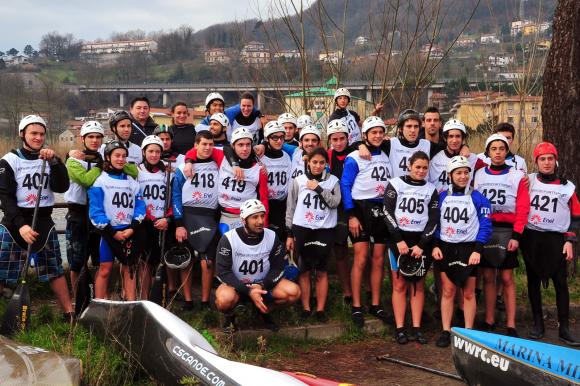 Organized by the Agonistic Sports Center of river canoe of the Navy of Maristaeli Luni - Sarzana, Sunday 12 January 2014 went on stage the Test - Classic descent race on the waters of the Magra river, in Aulla (MS), along a path of about 5 km , difficulty 3 ° +.

The canoeists, coming from the different companies, who presented themselves at the start, were greeted by a splendid and sunny day that partially warmed the icy waters of the river.

The athletes of the various specialties have fought on the rapids of the Magra that presented several pitfalls: there was a "bathroom".

Absolute best time of day for the Sc 1 ^ Cl. Mariano Bifano: the sailor, profound connoisseur of the river, has exploited the currents in his favor.

These are the best results of the day:

Worth noting, along the banks of the Magra, the excellent assistance of rescue personnel and the participation of the public intrigued by the "colorful" patrol that has animated the already moved waters of the river.

At the end of the competitions, in thanking the teams and athletes who intervened and to consolidate the already close bonds of affinity, the canoeists, managers and carers found themselves in a well-known fast food to conclude the day carefree and to meet again in the next tests , in view of the first races of the season.