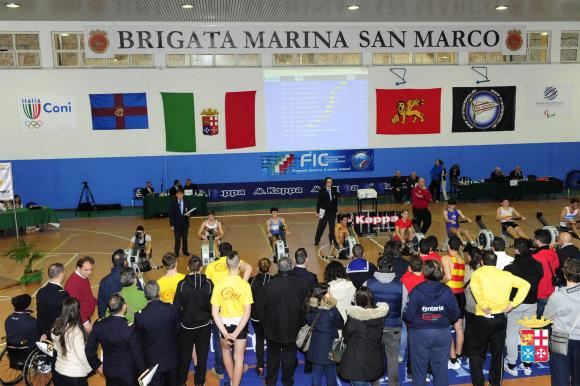 Nearly three hundred athletes of all ages, from all over Italy, took part in the Italian rowing indoor rowing championships, which took place over the weekend in Brindisi, in the Ermanno Carlotto barracks, headquarters of the Marina San Marco Brigade.

Organized in collaboration with the Circolo Canottieri Pro-Monopoli the event was the first of the year for Brindisi "European City of Sport".

The athletes competed in the various categories, both Olympic and Paralympic, in the presence of the president of the Italian Rowing Federation, the champion and legend of national sport Giuseppe Abbagnale, and in front of an audience that crowded the places where the Marine Fusiliers.

For two days, the 'Ermanno Carlotto' barracks were transformed into a small Olympic village open to the public, giving everyone the opportunity to attend the championships, and to get to know the equipment that the San Marco uses in the operating theaters.

The federal competitions were preceded, on Saturday, by the participation of high school students from Brindisi and the province, who were able to compete in mini-races on professional oar ergometers, amicably called 'fans' by professionals. Among the athletes also three Sailors, coming from theNaval Academy: Lieutenant of Vascello Augusto Zamboni, classified 2 ° in his category, the Chief of 2 ^ Class Daniele Ceccarini and the Deputy of 2 ^ Class Gennaro Agrillo.

A very intense moment was added to the sporting event when President Abbagnale, with a hands-free phone call with the entire 'building', expressed the solidarity and support of the entire Italian rowing community to our Riflemen, Massimiliano Latorre and Salvatore Girone, who received a strong and prolonged applause from the audience who wanted to be close to our Lions.

The XXV national meeting of the Italian Society of Underwater Medicine was held in Padua from 2 to 4 December and...
18
Read

Yesterday, at 12:00, in the suggestive Piazza d'Armi of the Aragonese Castle of Taranto, the...
31
Read

On Monday 5 December, with the award ceremony in the Piazza d'Armi of the Non-Commissioned Officers School of Taranto, it was...
12
Read

With the solemn act of Oath of Loyalty to the Republican Institutions last December 1st, at the Scuola...
283
Read

The handover ceremony of the command took place on 28 November 2022 at the naval base in Cagliari...
4487
Read

The third millennium has opened, as indeed already foreseen, with serious geopolitical crises whose effects have...
4676
Read