Naval Academy: the adm. Cavo Dragone at the inauguration of the Academic Year 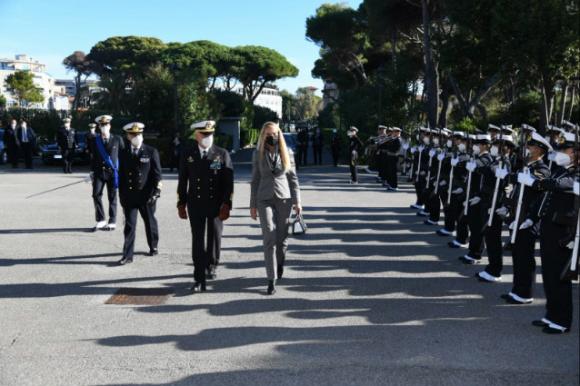 The inauguration ceremony of the Academic Year 2021-2022 of the Institute took place today at the Naval Academy of Livorno.

The ceremony took place in the presence of the Undersecretary of State for Defense Stefania Pucciarelli, the Chief of Defense Staff Admiral Giuseppe Cavo Dragone, the Chief of Staff of the Navy Team Admiral Enrico Credendino and religious, civil and military.

Admiral Cavo Dragone, during the ceremony, after thanking the attendees, pointed out, addressing the frequenting students, how the Academy is among the few institutes that pay a great deal of "attention to the past and to tradition". Suffice it to say that at the end of the first class the students board the ship Amerigo Vespucci, "In direct contact with the elements that will be characteristic of their entire future career, the sea and the wind, directly on the skin, without the intermediation of sophisticated systems, to learn to dominate them when necessary and to respect them" to then embark the fourth year of the Naval Academy also on the "gray ships" of the Navy with the "maximum of innovation and technology".

The Naval Academy founds "Its roots in the past as the then Prime Minister, the Count of Cavour wanted, merging the Marine of the Kingdom of Sardinia and the Kingdom of Sicily and today we are a Navy that, in this institute, combines the traditions of the past with a avant-garde training process in continuous evolution and growth " offering great opportunities to future officers of the Armed Force.

This year's ceremony falls on the 140th anniversary of the foundation of the Naval Academy, born in Livorno on November 6, 1881, from the union of the pre-unification naval schools of Genoa and Naples by the will of the then Minister of the Navy Benedetto Brin.

The event was also attended by exponents of the academic world, testifying to the importance that university education plays in the complex training course of Navy officers, sealed by a continuous relationship of collaboration between the Naval Academy and the universities of reference. of Pisa, Genoa, Naples and Trieste.

Yesterday, at 12:00, in the suggestive Piazza d'Armi of the Aragonese Castle of Taranto, the...
377
Read

With the solemn act of Oath of Loyalty to the Republican Institutions last December 1st, at the Scuola...
364
Read