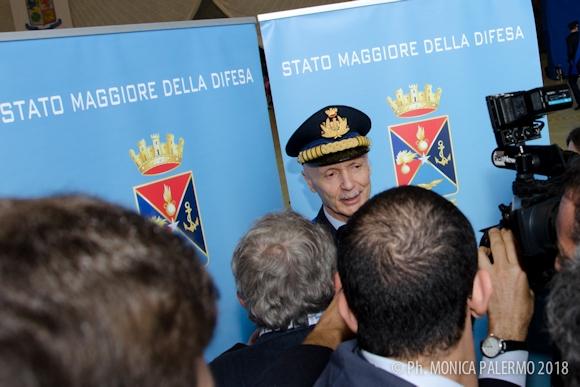 With the alternation ceremony in the office of Chief of Defense Staff between General Claudio Graziano and General Enzo Vecciarelli perhaps a chapter in national military history has ended, let's hope not just a paragraph.

Listening to the speeches of the protagonists (link) we can - we want? - seize sensitive signs of change.

The old chief of staff of the Defense greeted everyone present at the event, "in particular" who had supported his aspiration to fill the post, Senator Pinotti, theantiTrenta that the general has followed for over three years.

Then a lot of rhetoric, the usual. Perhaps that of those who lived in the Palace surrounded by too many Alberto Sordi who still repeat to the boss "Excellent and abundant!". More likely the thought of a truly remarkable officer (of this we are absolutely convinced) that, immersed in a mediocre system, sometimes underhand and cowardly like the Italian one, has adapted to the scenario and has done its best.

A pleasant note of discontinuity was caught in greeting the Press. General Graziano greeted "representatives of Public Information (??) whose presence represents attestation of esteem and friendship as well as of passionate and constructive proximity to the armed forces". The perplexity is about the recipients of that greeting: "Public Information" is the aberrant ploy with which the military leaders justify non-compliance with the law (L.150 / 2000) which provides for the presence of press offices in the State administrations (v.articolo)? I ask this question because - if it was aimed only at the military - they were there for service.

A smile then arises when listening to an alleged “passionate and constructive” closeness to the FFAA. When referred to fellow journalists, passion and courage have manifested themselves in recent years in the ability to criticize a system impervious to dissent. Unless the greeting was directed to the fearless and immortal ass-lickers present in every regime ...

The greetings of the new Chief of Staff, General Enzo Vecciarelli, are quite different: "... I greet the representatives of the media who will help us to illustrate the amazing activity of our men and women". The use of the future time is the only desirable one for correct information to fellow citizens without awareness of past traditions, difficult present activities and potential horizons. Free and correct information is still a field unexplored by national (and North Korean) leaders.

We trust that General Vecciarelli has understood how much the aversion to criticism (if sincere, founded and constructive) and propaganda are the worst enemies.

The last words of the old chief of staff of the Defense to the new were: Dear Enzo, I give you the stick of the command, but also the solitude of the command ...

The words we want to address to the new boss are: Dear general, do not remain alone in command, we are (distant) heirs of a people whose commanders marched, fought and suffered in the mud together with their soldiers. They were never, in any situation, "alone".