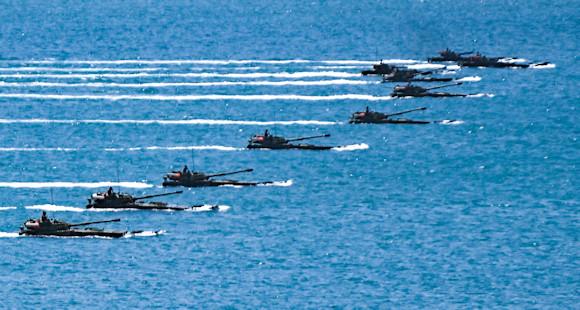 Today's visit to Taipei, first canceled then confirmed, by the speaker of the House of Representatives, Nancy Pelosi, is raising tension in the South Pacific.

None of the highest offices in the United States of America have set foot in Taiwan in the past 25 years. According to some sources, a meeting with President Tsai Ing-Wen is expected.

This political initiative has alarmed China, which certainly makes no secret of considering Taiwan the territory of the People's Republic of China.

In this regard, Beijing is flexing its muscles, concentrating landing forces with combat vehicles on the beaches of Xiamen, in Fujian Province, right in front of Taiwan.

The Marine Infantry Corps underwent a reorganization in 2017 in order to represent one of the tools with which Beijing is able to project power.

President Xi, some time ago, highlighted the tasks of the Corps, stating that the Marine Infantry of the PLAN is a combat force for amphibious operations that has assumed the important duties of safeguarding security, sovereignty, territorial integrity , maritime interests and overseas interests of China (a clear warning to Taipei). It should be emphasized that three years ago the PLAN became the first naval force in the world, surpassing, in number, the units in line with the US Navy.

We will see if it is just a "flash in the pan" or if this time Beijing will no longer be willing to accept other provocations and will fall into the "trap" set by the Americans.