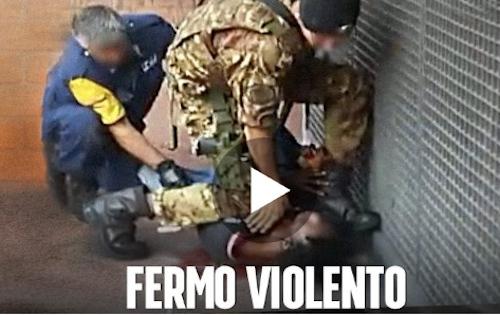 A video has become viral on the web: two soldiers of Safe Roads would have attacked a boy in possession of marijuana. The title? "Stay still, you do not have to move", the video of the violent stationary on the Rebibbia metro (v.link and video).

The memory is too fresh (and the epilogue! - v.articolo) of the story of a poor carabiniere victim of fire "friend" in the back to not make a parallel. Last December, in front of a clearly manipulated and distorted news, the then Minister of Defense had immediately sentenced the military to mediatic. It's worse! - information provided by the civil and military staff had corroborated the unfortunate interpretation of the incident.

Today it does not surprise me so much that the new minister asks for details on the dynamics before expressing themselves. The correctness of the explanation provided by the military is surprising.

There is a detail that has escaped. The blasphemies spread with the video are no longer a crime but an administrative offense for those who have pronounced them but remain prosecutable for those who spread them through the press or social media.

We attach below the response of Minister Trenta to the episode:

Fanpage.it and other press organs have published a video that shows two soldiers of Safe Roads intervene last Saturday against a non-EU citizen at the metro station of Rebibbia.
It is a video on which the General Staff of Defense and the Army have already provided me with every element, at my request, as quickly as possible, and on which I asked my staff to develop further checks to ascertain the truth of the facts.
Well, learned all the information of the case I think it is right, for my part, to point out some aspects to highlight that our two soldiers have acted with utmost commitment to ensure the safety of citizens.
I'll explain why, I'll explain what you can not see in that video, even for a question of transparency.
The citizen in question was in the company of another person; in the face of suspicious behavior of the two he was ordered to the alt for a check (remember that the military of Safe Roads, within their functions, have the same powers and the same prerogatives of public security agents).
The two people ignored the alt and fled; one of them, the one that appears in the video, fell during the race causing a wound to the head. Wound, therefore, that did not arise from any struggle, as someone has written.
At the standstill the two soldiers - acting in full compliance with the law and their prerogatives -
they found that he was carrying an important quantity of drugs. And that's why they did not let it go. Our two grenadiers acted respecting the law and protected the health of the subject by calling an ambulance that immediately transported him to the Pertini hospital for medical treatment.
I do not feel like blaming them, on the contrary, I feel like thanking them!
As can be seen from the video, there was a moment in which the military had to act firmly to completely immobilize the individual. This is because the military did not wear gloves when they were stationary, and this behavior, of course, fits perfectly into his chassis as the stopped citizen had lost blood.
It's easy to point fingers, it's easy to slip on prejudices. I ask for caution. And I do it after not having hidden my sensitivity on some issues.
If the two soldiers had acted in violation of the protocol, I would have been the first to ask for measures. So it was not.

It seems that Italy is finally becoming a better country for those who need it.

Let me paraphrase Rhett Butler and state that, unlike other analysts, I believe that of ...
9707
Read