Home Recommended Publishing The anniversary of the capture of Rome, f ... 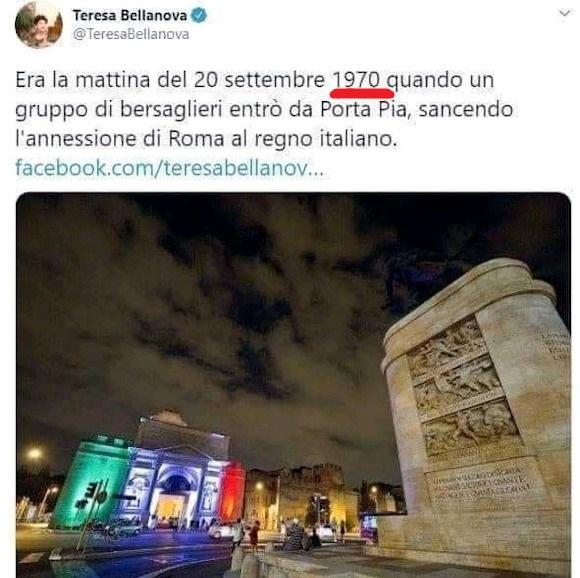 Thank you, Madam Minister * Teresa Bellanova for making us smile on the anniversary day of the capture of Rome, dating it to 1970 in a post on social media. We do not wrong them: just fifty years ago the political parties launched the final assault on the occupation of their entire power, with the establishment and the first elections of the regions with ordinary statute.

It makes us smile a little, to tell the truth, the image of "a group of bersaglieri" entering "from Porta Pia", as if it were a van at the North Rome tollbooth and above all as if they had not had to tear down the walls Aurelian with cannon fire to open what is commonly known as the “Porta Pia breach”. But you know, the current executive (like the previous one) takes the "refusal of force" so literally that some people spontaneously censor the use of military means even when it happened 150 years ago.

But, in all honesty, we have to ask you and the lady mayor * of Rome, Virginia Raggi a question: why the lights on the door in question draw, with four vertical bands of green, blue, white and red, the Saudi flag (or the old-fashioned Libyan Gaddafi flag) and the French one? Didn't they even manage to draw the Italian flag properly in the Rome of the beginning of the millennium?

* I refuse to write "minister" and "mayor" because the Italian - when not raped by the "politically correct" - rejects the cacophony. Do it again with Dante and Manzoni, if you don't like it.