Home Recommended Publishing The Palermo Conference: not a flop, but ...

The Palermo Conference: not a flop, but an abortion (without even a final declaration) 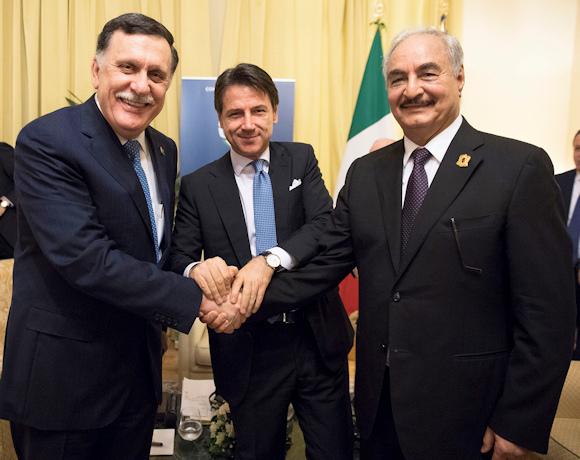 The premier Giuseppe Conte appears exhausted, but radiant: the agreement signed by the "5 + 1" in Palermo will probably mark a page of history of international relations and the final photo will be one of the most famous in history with a capital letter as those of the American presidents at Camp David with al-Sadat and Begin in the 1978 and in Oslo with Rabin and Arafat in the 1993.

He does not hide a sly smile: probably, in a year, he would have also entered the Olympus of the Nobel Peace Prizes. A nice recognition to be included in the curriculum ... On the other hand, if it had also earned during three months of efforts "crazy and desperate", disappearing from the Italian political horizon to devote himself, moving quietly, to weave a spider's web for permanent stabilization of Libya.

The venue chosen for the informal talks was Castel Gandolfo, with the papal palace made available by the Holy See along with a series of good offices with the Arab and African countries that Italy had unfortunately lost for some time, but that Bronze Gate, they have always been carefully cultivated. Thus, by the end of July, a series of helicopters had begun between the Roman Castles and the capitals of the Middle East. Certain movements of the Sixth Fleet of the United States off the coast of Libya had arrived as many telegrams for the clan chiefs of that country: the failure of the Palermo conference, strongly desired by Italy, would have led to a massive use of military force against the parties less reasonable, accused of being sponsors of terrorism. And he would have left Libya without the oil, military and civil infrastructure. The justification would have been precisely the refusal to comply with the decision of Washington ... ops, of the international community.

In those months, Conte had often thought, to himself, that God alone knew how he had found the courage and words to involve President Trump in this campaign! He had succeeded in not proposing unmentionable exchanges, but simply challenging him: if the Roman diplomacy had failed, he would have served the tycoon the excuse to growl in front of American public opinion, avenging the attack on the American consulate in Benghazi, as its predecessor was not , after all, managed to do. To be fair, the delivery of a certain number of terrorists by the clans was among the conditions on the table. But at the bottom of the pile of documents ...

The idea was that of a "cantonization" of Libya, with the division of territory, resources and military forces on a semi-tribal basis, avoiding the reconstitution of a strong leadership but favoring participation in power through a directory whose members would be remained in office for two years, with functions of Government, as well as a directly elected Parliament, with the over-representation of minorities and in fact the need for qualified majorities. In fact, the leaders of the major clans would share / divide the resources, with a series of guarantees, assuring the greatest time sufficient to get rich and then disappear from the scene, as happened in Mexico with the presidents of the PRI. But above all by excluding the mutual "sponsors" from roaming freely between Cyrenaica, Tripolitania and the desert regions: access to the territory and Libyan resources would have been possible for pure investors. To this end, there would be a conference, to be held in Nice within six months, to plan the "investments", according to a simple but effective logic: the "spheres of influence" would be maintained, but de-militarized and limited in space because no one could "launch a takeover bid" on Libya or on a substantial part of it.

As for the weapons in too much circulation in the country, they would have been delivered on a tribal basis in exchange for money and the possibility of competing in the elections and taking part in the directory. Five countries would have been "morally" guaranteed (officially, Libya's independence, in the substance of the agreements on spheres of influence / investments): Turkey (also on behalf of Qatar), Russia, France, Italy and Saudi Arabia (also for account of Egypt). In Cairo and in Algiers 500 km of demilitarized zone and no-fly within the Libyan territory were guaranteed, as well as leading exponents of the directory chosen among the "friends". Sixth guarantor would have been the US itself, which would have retained the right to intervene in case of any violation of the agreements.

Conte was already thinking of the future Nobel Prize winner when he woke up. The Palermo conference had been a nice catwalk of Libyan leaders and captains, along with lazy and unconvinced international leaders, intervening only to put their hand on the shoulder of their "maintained". Only the move from drama queen of Turkey, with the withdrawal of the delegation, had given a little color to a gray and predictable event, even without a final piece of paper1.

What a bad awakening, Mr. Premier!

1 The spokesman for the premier, the former GF Rocco Casalino (the one that "i down disturb me"), hastened to define "binding" an oral commitment. Which is tantamount to sensational nonsense.

(photo: Presidency of the Council of Ministers)