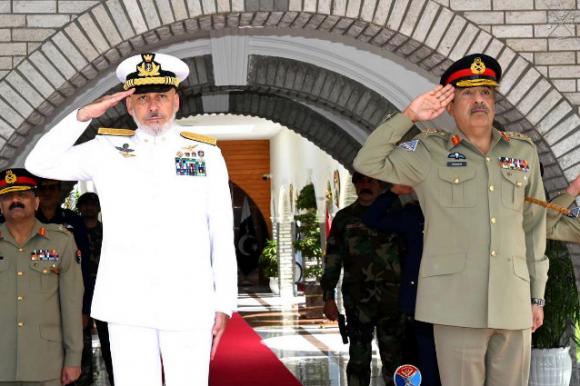 Defense Chief of Staff Admiral Giuseppe Cavo Dragone recently completed an institutional visit to Pakistan. The visit is part of the initiatives for the development of bilateral relations between the countries of the so-called "Enlarged Mediterranean", in its broadest sense, of which Pakistan is one of the leaders.

Cavo Dragone met, among others, the leaders of the Defense of Islamabad, highlighting the further strengthening of security cooperation, in particular in the field of the defense industry.

Well it seems to us that the wrong relationships are being treated. As our readers know Pakistan is a China's iron ally. The Asian state is on the crossing line of the "New Silk Road" (trapped by the debts contracted with China itself to build the necessary infrastructure) and one of the largest arms buyers in Beijing.

Fincantieri has a series of naval orders with India, historical enemy of Pakistan, while the latter buys combat units from China, moreover of dubious operational capabilities (we are talking about the stealth corvette class Azmat).

In short, despite the world's attention being focused on the conflict in Ukraine, in the Indian Ocean and South Pacific area, for some time now, the lines for the next conflict between China and the United States are emerging.

Italian diplomacy gets by with outdated Byzantinisms; could work during the Cold War, when we were in dialogue with both Israelis and Palestinians (and with Hezbollah).

In the current World Order, relations with Pakistan (and therefore with China) appear more than anything else the result of a "particular interest" of some Italian politicians, rather than a precise strategic line for the benefit of Italy.

If Italy worthily honored its soldiers this would be a different country; if instead of celebrating false myths, ...
1453
Read

Today's visit to Taipei, first canceled then confirmed, by the speaker of the House of Representatives, Nancy Pelosi ...
5661
Read

Summer has arrived: it's time to have fun using geopolitics, a "scientific" discipline and not a toy ...
5670
Read

Umberto Eco said, not the last gun at the bottom left (or right in via bipartisan) university graduate ...
2399
Read

Hagiographies are not suited to politicians; the saints are something else, given their exclusive relationship with a ...
2043
Read

Let me paraphrase Rhett Butler and state that, unlike other analysts, I believe that of ...
11189
Read

Online Defense readers often ask me if it would be no less painful for Ukraine to give up and accept a ...
5858
Read

102 days of war brought to light many aspects of our country that were easily imaginable or we had ...
5425
Read

"The West has grasped the desire to create peace plans that should lead to a solution to the crisis in ...
2341
Read