Bitter morsels for Eurosceptic sovereigns in Italy and the United Kingdom 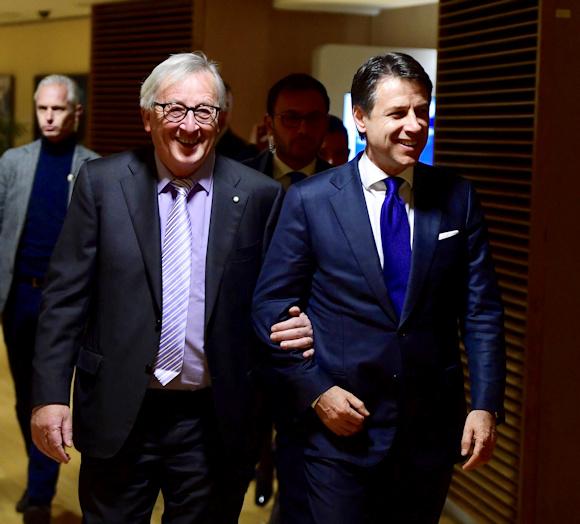 There is a ghost that wanders around Europe: it is that of the anti-Euro sovereignists1, which in the vulgar social media of their political parties2 they should be decisive - and revolutionary - after the May 2019 European elections. Perhaps it will be so, but for now, said in words, this ectoplasm seems to have found an Otis family in Italy, in the United Kingdom and, above all, in Brussels3 whose little ones mock their scary powers. In short, for now it was the commission of Jean-Claude Juncker, one on which for years hater sovereigns overthrow tons of insults4, to give the papers. Mind you: even with all its limitations and manias, let's talk about a Christian Democrat who has been in politics since Luigi Di Maio used diapers5, has been in charge of Finance since Margaret Thatcher ruled in London - and not her pale shadow Theresa May -6 and is the head of an executive since Matteo Salvini gave his first speech to the city council of Milan against the eviction of the Leoncavallo social center7. At his side, Juncker had the socialist Pierre Moscovici, a product of the best political training school in the world, the French ENA8; one capable of making poor Hollande president elect, which tells it all! From above, Mario Draghi, a student of Federico Caffè, Franco Modigliani and Stanley Fischer, observes them9.

So, in Italy at a big-hearted summer with Europe on social media and with a spread on fire, it was followed - after a prophetic warning by Tsipras10 - a retreat on all fronts, with a "maneuver of the people" rewritten to four hands with the Euroburocrats11 with potentially recessive effects. In this regard, the words of the author of Plan B for the exit from the Euro deserve to be read12, the professor. Paolo Savona as reported by Corriere della Sera on November 21: "You can not go on like this anymore, it makes no sense. And the maneuver as it is no longer good: it is to be rewritten ". And, for not having wanted to write according to the commitments made, if you have seen it drop from above, with the "numerini" imposed by Brussels. That we could not fight alone, as we will see with the ostracism even of governments with a sovereign traction, against Brussels, then, is something that can be understood without a doctorate in economics: with tens of billions of Italian titles for sale under their nominal value and with the confidence of international investors to the lows from the 2011, even domestic investors13 have left the tasty - and safe - BTP Italy to lose, buying one twentieth of the forecasts. Other than gold for the country: on the eve of a recession14, the Italians have washed their hands, not recognizing themselves in the struggle, legitimate but quixotic, of the majority. One wonders, at this point, if who does the polls understand it, that it makes no sense to ask for those who would vote to people who see only Salvini and 5 Stars on the media every day, but who, at the decisive moment, is not willing to give him money.

It does not count for the Eurosceptics, then, that Europe regulates not only the rumors indicated in the election campaign, but also everything that makes our lives well regulated or, if not regulated ... an infernal nightmare, like international flights, security, capital flows, transactions between banks, work abroad of many Italian compatriots in search of greater luck15. Whoever goes so far as to say that the big banks are leaving the City en masse16, which thousands of Italian, Polish and Romanian workers17 are they worried about their future and that even the airlines are in alarm and plan to cancel the flights after the 29 in March?18 Not to mention, then, the question of Northern Ireland: within Europe, Catalonia has had to surrender and has remained in Spain; outside of Europe, no difference between Northern Ireland and Donbass ...

The aforementioned ghost, feeling lost, has broken into many small Casper: as many as the souls of a movement that, when it claims the sovereignty of its own nation, refuses to collaborate with other sovereign forces, if not for local promotional initiatives19 and that often, in some of his souls, he only aims to govern with the less liberal Christian Democrats. Because, after all, an alliance of the various sovereign forces is an antinomy, like the alliance of neutrals proposed one day almost 70 years ago by the "dossettiani" during a session of the Italian Parliament, as an alternative to Atlantism. To the question: "Who will defend us in an alliance of neutrals?" A deputy answered that it was obvious: "The other members of the alliance!" Only then, he realized that we would be alone, because no neutral would defend another. Suns: with our fears and our weaknesses. And, after all, the parallel stories of the maneuver dictated by Brussels and BREXIT get out of hand just to this point: even if politically and militarily still very weak, the Union is the only way we can not end up crushed in the fight between the great powers, to "make a system". But you know, the Italians make a system fails among themselves; let alone with the Europeans.

PS The present editorial, written on the subject of Freedom of Freedom granted to external collaborators, is George Soros-free and has not been funded by the European Commission, the PD or by Forza Italia.

1 That on these pages you will never hear called "neo-fascists": it is, in the majority of cases, legitimate antisystem political forces, to the democratic government in countries like Italy, Spain, Austria and Hungary, in this last case even as a member of the EPP .

2 Written in the plural because it involves different movements: from the extreme left to the radical right, passing through Podemos and certain fringes of the Five Stars.

3 The quote is from Oscar Wilde's Phantom of Canterville.

4 Among them, the most amusing is that which would be a drunkard. As if, from the time of Ulisse Grant to today, in front of a politician or a military man with a bottle defect but capable on the field, we should not take off his hat anyway.

7 Luxembourg Prime Minister from 1995 to 2013, when he became president of the European Commission.

8 In this regard, when the writer hears the Italian political parties speak of "political training school", he is reminded of a parish football team confronted with the great Brazil of Pelè, Didi and Vava.

9 It is also the Dragons that engages the big business banks and convinces them to invest in the Italian privatization of the beauty of 182.000 billion Lire, a tiny thing like a tenth of GDP. But of this the hater never speak: for some of them, Federico Caffè is perhaps the brand of a Roman espresso ...

11 The "people" maneuver should include in the safeguard clause the increase in VAT from the current 22 up to 26,5% and, in any case, spending cuts (health care? School? Or maybe ... Defense ??) for almost 40 billions in three years.

12 Just to remember it: http://www.difesaonline.it/geopolitica/analisi/il-piano-b-di-savona-noi-...

13 In short, you who read us or if you are not your neighbors, parents of your child's friends, your friends at the bowls club etc.

14 It seems likely that the fourth quarter will see - as the third - falling GDP.

15 Those who for Di Maio's predecessor "did well to stay where they are and not to break the boxes".

17 Who explains it to the right and left sovereignists that in the UK the Italians are - with the Romanians - those dark skin, who speak strange and "steal work"?

19 Remember the comment of the leader of AdF Alice Weilder? "The crazy maneuver of the Italians is at the expense of Germany: because we have to pay us for the rich Italians", https://www.huffingtonpost.it/2018/10/25/lestrema-destra-tedesca-prende-....

(photo: presidency of the council of ministers)