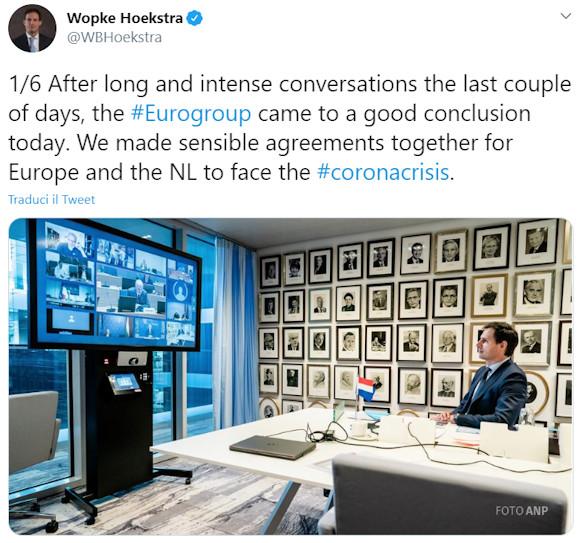 Foscolo wrote neither the Last Letters of Jacopo Ortis: the sacrifice of our country is consummated, everything is lost; and life, even if it is granted, we will only have to mourn our misfortunes, and our infamies.

On his Twitter profile, the Minister of Finance of the Netherlands Wopke Hoekstra is one of the first to communicate that with the approval of the Save States Fund (MES) the European Union will provide unconditional funds for the medical expenses of the member countries, and will be available for loans to support the economy of the member countries, obviously the support will be conditional.

Therefore, even if Italy will not have conditions for healthcare expenses, it will have them for all the other sectors essential for the recovery of the national economy.

Just three days ago, Prime Minister Conte, on live television, said that Italy would say no to the ESM and yes to the Eurobonds. Instead the result seems exactly the opposite - among other things, in our opinion, even the Eurobonds (or "coronabond" if you like) would have guaranteed nothing, as intended as a European debt and therefore managed by the Union -, opening de facto Italy to controlled management.

We recall that the European mechanism of the ESM is activated when a member country of the Union no longer has access to the market, that is, it can no longer refinance the debt through the issue of securities: a situation in which Italy is not.

It remains to be seen whether the consent of the Executive to the ESM will survive the parliamentary passage, as a 2012 law (Law No. 234) states that any international financial agreement requires the approval of the Chambers.

Let me paraphrase Rhett Butler and state that, unlike other analysts, I believe that of ...
9127
Read

102 days of war brought to light many aspects of our country that were easily imaginable or we had ...
5030
Read

These days Ukrainian fighters are receiving arms supplies from NATO and other countries of the ...
10682
Read