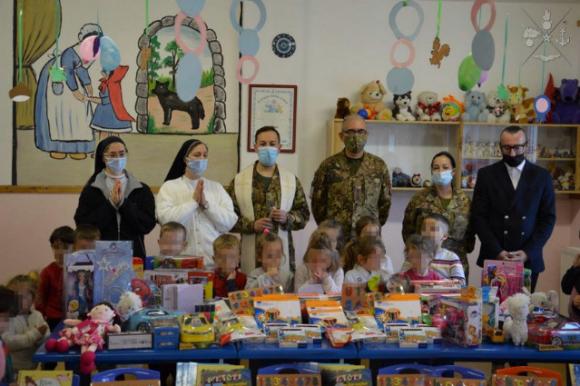 The Italian contingent in Kosovo, employed in the named NATO mission Joint Enterprise, in the first ten days of November it carried out two important Civil - Military cooperation projects in favor of the Kosovar population in the public education sector.

The donations were made from Administrative Administration Center (CAI) of Peja / Pec and by the Italian Unit of the Regional Command West (RC-W) of KFOR with Yellow Devils of the 185th artillery regiment actual paratroopers to the brigade thunderbolt of the Italian Army.

The first donation was made in Bec in favor of the school called Casa per la Pace, run by the Sisters of the Order of San Basilio.

Colonel Walter Petruccelli, current director of the CAI joint forces, coordinated a sponsorship activity in favor of the institute to which many companies have autonomously joined. In particular, the Kosovar companies that have relations with the Italian contingent, the Post Exchange stores present within the Villaggio Italia base and the Italian companies supplying the contingent abroad, intervened.

The sponsorship activity made it possible to collect and donate to the sisters a voucher of heating oil of 2679 liters, stationery items and toys; all assets in favor of the children of the institute who belong to different ethnic groups and religious faiths. 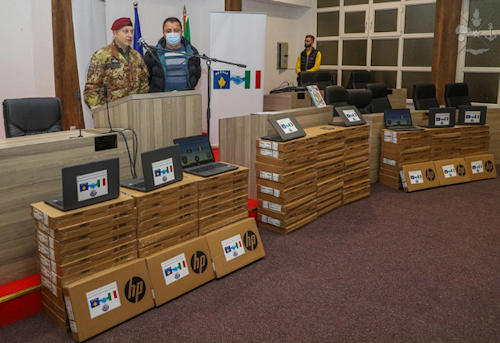 The second civil-military cooperation activity involved the delivery made by the Italian contingent of KFOR present at RC-W to the municipality of Decane / Decan of 102 laptops.

The mayor Bashkim Ramosaj, the councilor for education Bekim Vishaj and Colonel Andrea Bertazzo, commander of the Regional Command West.

This donation of the laptops will provide additional teaching aids to enable teaching that is more in line with modern methodologies.

The Italian contingent of the KFOR mission, with the completion of its civil-military cooperation projects, will continue to ensure the fulfillment of the mission's task according to the dictates of United Nations Security Council Resolution 1244 of 1999, in order to guarantee a safe and secure environment for all communities living in Kosovo.

In the presence of the air squad general Nicola Lanza de Cristoforis, deputy commander of the Operational Command of ...
788
Read

It took place on the afternoon of last Saturday, June 18, at the multipurpose hall of 'Camp Singara', the base that ...
289
Read

On 19 May, the European Multi Mission Frigate Carlo Bergamini received a distress call from the ...
999
Read