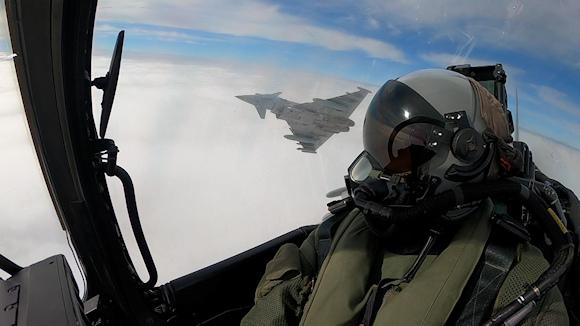 Another joint scramble - the fourth so far - for the Italian and German component currently involved in the Air Policing promoted by NATO to strengthen the defense of Romania's airspace. The Eurofighter pair's quick take-off order came following a potential entry into the airspace under the responsibility of Romania by an unauthorized aircraft.

The two fighters were deployed on a Combat Air Patrol (CAP) mission within the Romanian FIR (Flight Information Region) before returning to the Constanta base. For two weeks, thanks to a bilateral agreement, the Italian and German Air Forces have been guaranteeing the strengthening of the air defense device of the European country, an activity that is part of the commitment that the Air Force, through the Task Force Air Black storm, has been insuring in Romania since the first days of December as part of the Italian-led NATO mission of Enhanced Air Policing Area South (eAPA-S). This is an initiative that strengthens the interoperability and partnership of the two countries that share the same weapon system, theEuro Fighter.

The Air Force is present in Romania with eight aircraft Euro Fighter and flight crews coming from the four flocks that normally, in the homeland, guarantee without interruption the defense of the Italian airspace (4th flock of Grosseto, 36 ° of Gioia del Colle, 37 ° of Trapani and 51 ° of Istrana). In these three months the Euro Fighter of TFA "Black Storm" have carried out numerous training and operational activities within the QRA (Quick Reaction Allert) service. For Italy and the Air Force this is the second Air Policing operation in Romania, after the first experience in 2019.

The TFA Black storm, committed today to strengthen the Romanian air defense system, as well as the other units of the Air Force that took part in the other Air Policing it is a structure that traces in its functions a flock, the characteristic operational unit of the Air Force.

It is a functional and at the same time flexible structure. The aircraft are integrated within the NATO device to support the airspace surveillance operations of the Alliance countries and operate in close coordination with the allied assets present in the area.

The frigate Carlo Bergamini returned to Taranto on 2 July at the end of a long period of assignment ...
185
Read