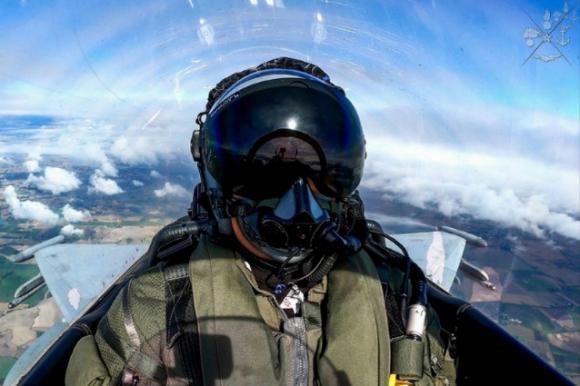 An intense week that the men of Task Force Air White Eagle have faced up to now, due to the numerous interventions requested by the CAOC of Uedem in Germany, often culminating in Alpha Scramble with immediate take-off.

The area affected by all the alarms called by Combined Air Operation Center (CAOC) of Uedem is that of the Baltic Sea, which is seeing in these days the presence in the area of ​​Kaliningrad adjacent to the Polish FIR, of an impressive exercise of the Russian Federation, the so-called Combat and Staff.

The simultaneous presence in the Baltic also of some naval assets of NATO, has meant that in order to guarantee the security of the borders of the Alliance, taking into account the complexity of the context, the NATO chain of Command and Control has created a maximum security device for all the assets present, including through numerous ones Scramble, which in the period from 19 to 23 September were 8 only for the Italian component of the TFA White Eagle.

- Euro Fighter of the Air Force deployed with the Italian contingent for the first time in Poland, responded with promptness and immediacy to all calls, within the times and in the manner provided for by the mission of enhanced Air Policing of NATO, a purely defensive mission and not based on a specific threat, always and in any case aimed at preserving the territorial integrity of the Alliance, with security measures that can be increased or reduced according to the security situation.

Considering the complexity of the moment, the difficulties of operating so close to the border and, last but not least, the risk that any error could be considered as a provocation, it is absolutely pleonastic to represent the operational readiness of the whole Task Force, severely tested in this week by continuing to operate at all hours of the day, has been guaranteed by the professional preparation of the Italian staff and the logistic apparatus that supports them every day.

Particular mention certainly also goes to aircraft Euro Fighter that respond, thanks to the aforementioned commitment, always with maximum performance and safety.

L'Air Policing (AP) is a mission that NATO has equipped itself since the mid-XNUMXs and consists of integrating the respective national systems of the member countries into a single NATO air and missile defense system.

The activities Air Policing it has been conducted since peacetime and consists of the continuous surveillance of NATO airspace and the identification of all possible violations of it.

At the headquarters of the Engineering Regiment in Beirut, in the presence of Colonel Farhat of the training directorate, of the...
31
Read

The training activity saw the units of the Battle Group Bulgaria engaged which, within the Novo Selo Training ...
91
Read

On November 9, the general of the army corps Francesco Paolo Figliuolo, officer at the top of the operational command of ...
2174
Read

With the arrival today at the port of Doha of the ship Paolo Thaon di Revel, the first of seven units of the new class of...
9350
Read