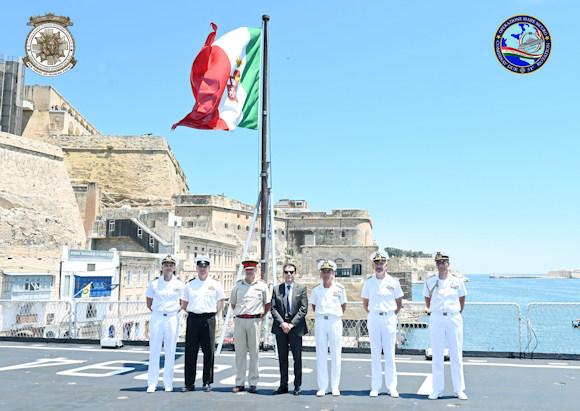 The division admiral Vincenzo Montanaro (tactical commander of the Operation) and the commander of the unit, vessel captain Antonio Giuseppe Palombella, received on board the ambassador of Italy to Malta, if Fabrizio Romano, the commander armed forces of Malta CAFM col. O'Nell, and the maritime squadron co. Scicluma.

Many issues were addressed, first of all cooperation in the maritime field, demonstrating the fact that the Mediterranean is of absolute interest to both sides.

In bringing his greetings to the crew, the ambassador expressed his appreciation for the commitment of the Navy, a qualifying component of the action conducted by Italy to guarantee maritime presence, surveillance and security activities in the central Mediterranean and in the Strait of Sicily. .

“I am happy to be able to receive Nave San Giusto in Malta. The civil and military diplomatic authorities, with their presence, increasingly strengthen the idea of ​​the Italian System in a country linked to us by centuries-old traditions of friendship and collaboration in the strategic sector of the Mediterranean - said the Italian representative - Help make my job easier, thus making visible the continued efforts of the Armed Forces in defense of national interests. "

The purpose of the meeting, realized thanks to the fundamental contribution provided by Italian Military Mission in Malta (MICCD), is part of the cooperation and development activities aimed at strengthening the functions of the Navy with the Mediterranean countries.

The Operation Safe Sea, launched on 12 March 2015, today deploys an air-naval device composed of units belonging to the 4 naval divisions of the Navy. The offshore units included in the aeronaval device operate in a sea area of ​​about 160.000 square km, in which numerous activities of great national interest exist and on which the prosperity of our economic system depends, such as the transport of raw materials. and of the country's products, fishing and the extraction of important energy resources.