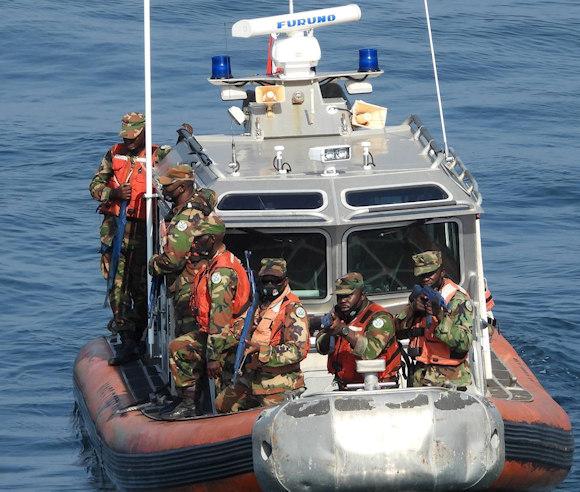 Ship Antonio Marceglia, leaving theHigh Risk Area of the Gulf of Guinea scope of operation Gabinia 2021, stopped at the port of Monrovia (Liberia), a coastal town on the North Atlantic coast of the African continent.

The first activity carried out was a survey of the port of Monrovia by the Diving Operations Group (GOS) assisted by the personnel of the marine brigade Saint Mark and by the navigational officer on board, an operation usually scheduled before entering a new civil source aimed at achieving multiple objectives: checking the maneuvering spaces inside the roadstead by checking the seabed in sensitive points; ensure the absence of underwater devices and, in general, of other threats to the safety of the unit; verify the correct application of the required arrangements at the assigned berth.

The visit was a precious opportunity to strengthen the collaboration between Italy and Liberia, also thanks to the realization of a joint training activity proposed by Nave Marceglia in fulfillment of the mission of capacity builiding and training of riparian navies.

In a scenario of anti-piracy and fight against illicit trafficking, the Hurricane assault vehicle by Nave Marceglia performed high-speed attack profiles simulating being one skiff pirate intent on assaulting a merchant unit; by ensuring a high level of realism, the consolidated alarm procedure has been triggered Maritime Operator Center of Monrovia receive the distress call and consequently activate the assets of the Liberian National Coast Guard, which promptly intervened on the scene of action with a patrol boat, the LCG 003.

Perform the identification, interrogation and detention procedures of the pirated merchant (simulated by Nave Marceglia), a team of special forces was sent to conduct boarding activities aimed at restoring security conditions. At the end of the interaction, the Nave staff Marceglia he thanked the colleagues of the Liberian Coast Guard for the professionalism shown and for the training opportunity provided, receiving, in return, the wish of "good wind" for the continuation of the mission.

Before departure, the frigate captain Francesco Ruggiero also had the honor of speaking by telephone with the Italian ambassador to the Ivory Coast, if Arturo Luzzi, recently settled in Abidjan, with secondary accreditation for Liberia and the Sierra Lion. The ambassador thanked the commander Francesco Ruggiero for the task carried out by Nave Marceglia during the operation Gabinia and reiterated the importance of the Navy's commitment to promoting maritime security in the Gulf of Guinea, especially due to the heavy geopolitical and economic significance it holds.

Ship Marceglia then resumed navigation towards the port of Dakar in Senegal, continuing to fulfill the assigned mission and ensuring presence and surveillance aimed at defending national interests and maritime safety.

Nave Caio Duilio has recently crossed the Pillars of Hercules, undertaking the oceanic route that will bring unity ...
54494
Read

With the last two courses in favor of the National Police of Djibouti (PND), the activities of the section ...
502
Read

The Eurofighters of the “Black Storm” Task Force Air, located at the Mihail Kogălniceanu airport in Constanta - Romania ...
3213
Read

"Italy at the command of NATO Mission Iraq confirms the excellence of our country's Armed Forces at the level ...
878
Read