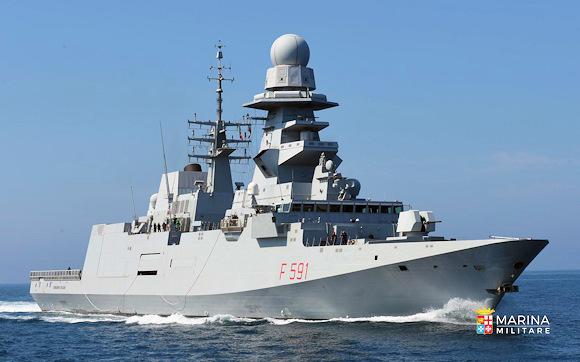 The Italian Defense with Ship Virginio Fasan (F591) officially takes part in the European-led operation "EUNAVFOR Somalia - Operation Atalanta" created to combat piracy in the waters of the Red Sea, the Gulf of Aden and the Indian Ocean. There European Multi-Mission Frigate (FREMM) Italian enters the device of the European Union Naval Force Somalia (EUNAVFOR Somalia) and will also fulfill the role of flag unit (Flagship).

The unit, which will alternate in the area with Ship Carlo Bergamini, dismounted on 9 June last and for the next two months it will be called upon to carry out multiple activities aimed at preventing and possibly repressing acts of piracy in the maritime areas of interest of the Operation, to protect the freedom of navigation of merchant traffic.

Ship Virginio Fasan it has on board specialized assets of the helicopter section, of the marine brigade Saint Mark and Diving Operations Group (GOS) of the Diving and Inshore Command (COMSUBIN), necessary to effectively carry out all the tasks required by the mission.

The Italian crew will also be engaged in defined activities of Civilian and Military Cooperation (CIMIC), in order to provide support to local populations, as well as to monitor fishing activities off the Somali coast. There will also be training opportunities with the navies of the countries operating in the area in order to increase the level of training and interoperability of the respective crews, as well as enhance and promote the peculiarities of the systems embarked on the FREMM class units in the context of continuous support. of the Navy to the Country System.