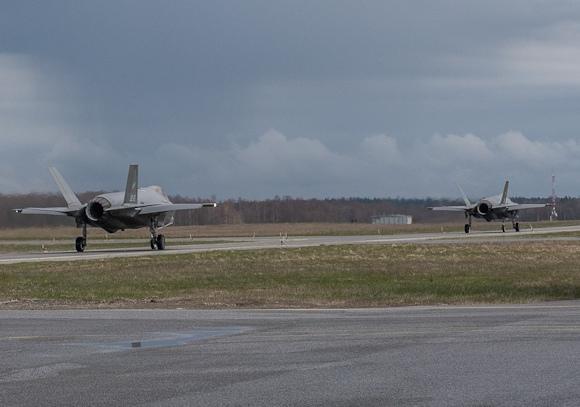 In the night between 4 and 5 June, two F-35A aircraft of Task Force Air - Baltic Eagle II deployed at Ämari airport in Estonia, they have been activated since NATO Combined Air Operation Center (CAOC) of Uedem (Germany) with a rapid take-off order to intercept an unidentified aircraft in the NATO area of ​​competence.

The aircraft was quickly joined by the two Italian fighters as it flew over the international waters of the Baltic Sea.

The F-35As carried out the envisaged “Visual Identification” (VID) procedure and, at the end of the operational activity, returned to the air base.

The activity of the Air Force fighters in the Baltic region continues unabated: that of the night between 4 and 5 June, in addition to being the first night, is in fact the third real intervention conducted in three days, after two similar missions of interception carried out on 2 and 3 June.

Since taking up their role in safeguarding the skies of the Baltic Republics, sanctioned with the "handover" ceremony on May 3, the flight activity of Italian pilots has been continuous, not only to ensure theAir Policing for the NATO mission, but also for the numerous training and exercise activities carried out with air and ground assets of the Allied Armed Forces present in the area, areas in which the fifth generation aircraft has confirmed the considerable capabilities it has at its disposal.

The participation of the Italian crews of the Task Force in the exercises Summer Shield e Spring Storm, carried out in the Baltic region, made it possible to carry out joint flight activities both with the troops deployed on the ground and with allied aircraft, including Typhoon Spaniards, the Albatros Estonians and i SU-22 Poles.

The joint activities made it possible to enrich the technical-professional background of both Italian pilots and those who collaborated, for the first time, with the fifth generation set-up and provided a clear demonstration of the extraordinary capabilities of the F-35A aircraft.

In the presence of the air squad general Nicola Lanza de Cristoforis, deputy commander of the Operational Command of ...
758
Read

It took place on the afternoon of last Saturday, June 18, at the multipurpose hall of 'Camp Singara', the base that ...
283
Read

On 19 May, the European Multi Mission Frigate Carlo Bergamini received a distress call from the ...
961
Read