MISIN (Niger): donation of medical supplies for the population 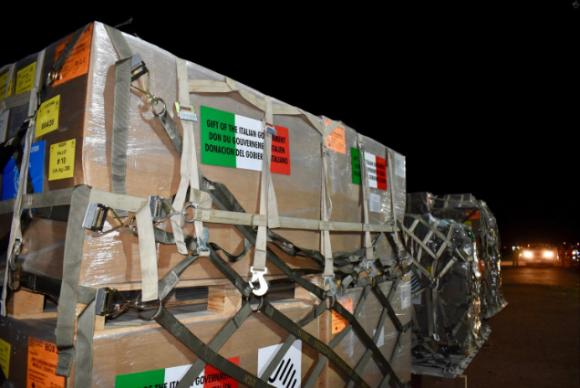 On June 28, humanitarian goods arrived in Niger in response to the country's health crisis with the C130J air carrier of the 46th air brigade of the Italian Air Force.

The Ministry of Foreign Affairs and International Cooperation, supported by MISIN, donated medicines and health kits to the authorities of the country and to the benefit of the local population.

The donation ceremony was attended by: the charge d'affaires at the Embassy of Italy in Niger, Dr. Francesca Orsini, the assistant secretary general of the Ministry of Public Health of the Population of Social Affairs of Niger M. Bawan Allahgoubekoy and the commander of the Bilateral Support Mission in Niger the gen. b. Alessandro Grassano.

The donation strengthens the already solid relations of cooperation between Italy and Niger which in recent years have become increasingly stable thanks to the work of the men and women operating in MISIN in support of the Nigerian Defense and Security Forces (FDS), in the delicate task of fight against local organized crime, the fight against terrorism and illegal trafficking in human beings.