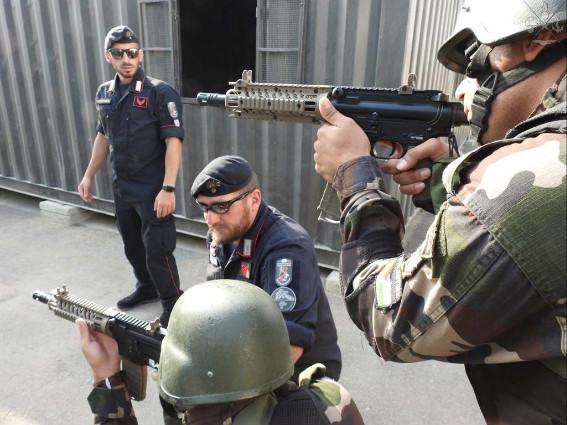 Instructors of the Carabinieri Corps have formed 40 selected units of the PG, Presidential Guard Palestinian with the "Special Police Operations" course.

After a first theoretical phase on the knowledge of weapons and equipment, on the identification of the target and the operational planning of the interventions, more and more complex exercises were developed on tactical techniques and movements - in a restricted environment and on open spaces - on activities of irruption and reclamation of the places, on cold break-ins e breatching.

The practical activities, "full equipement" and with the use of Paintballs, weapons with staining projectiles, were carried out in the training areas of the Central Training Institute - CTI in Jericho and involved pupils in operational planning and belt operations and execution of a police operation, with teams from 4, 6 to the 8 units, where the special teams of the PG have simulated actions aimed at controlling and freeing authorities held hostage.

The AK 47 assault rifle activities were developed, from an operational police shooting the 13 ° rgt instructors. "FVG" have moved to dynamic shots, with tactical movements and exploitation of vertical and horizontal shelters, with the simulation of jamming and changes of tactical and emergency loaders. At the firing range at 200 meters of the GMTC - General Military Training Center of Jericho the students practiced shooting techniques. 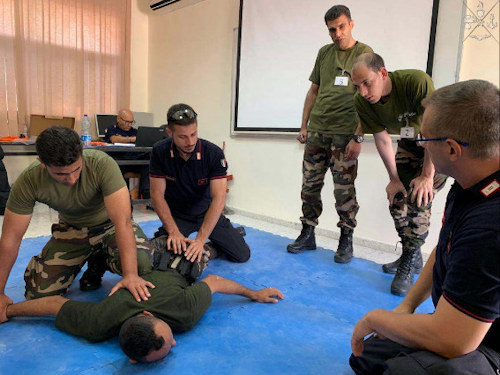 The course was completed by personal defense and disarmament techniques, with the operations of handcuffing and personal and vehicular search.

An instructor from the Vicenza CoESPU (Center of Excellence for Stability Police Units) lectured on the Code of Conduct for Police Operators and Human Rights.

The instructors belong to the operational departments of the 2 ^ mobile brigade, a unit of the Carabinieri Corps destined for military tasks in out-of-area operations and to the competition for Integrated Defense of the National Territory, especially the 7 regiment Trentino Alto Adige and of the 13 ° regiment Friuli Venezia Giulia, with experts from the Territorial Weapon, formed 40 selected units of the PG - Presidential Guard Palestinian.

"Seeing the students grow quality every day has been the greatest satisfaction of the instructors of the MIADIT Palestine 11", said Colonel Filippo Calisti at the end of course ceremony, among the compliments expressed by Colonel Mohammed Yaseen responsible for the Training Center of the PG in Jericho.

Joint training between UN quotas was conducted from 13 to 17 January - in particular ItalBatt ...
27
Read

Standing NATO Maritime Group 2 returned to the sea after the winter break. The Naval Group, consisting of four ...
361
Read

Two days of study ended in recent days in Niamey, as part of the mission in Niger MISIN, ...
206
Read

Start of intense year for Civil and Military Cooperation (CIMIC) activities in favor of the Kosovar population ....
459
Read

The commitment of the Italian contingent of Resolute Support continues, currently based on the 132nd armored brigade "Ariete" at ...
175
Read

Yesterday Carabiniere Ship left from the naval base of Taranto for an operational deployment of six months in the role of ...
1511
Read

Operational readiness, reactivity, interoperability, flexibility of use, ability to cooperate, effectiveness in ...
811
Read

As part of the mission in Niger, the first training course was held in recent days ...
147
Read