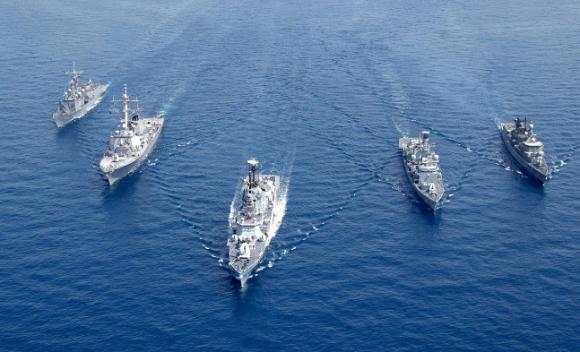 Friday 01 July, at 09.30, aboard the frigate Carlo Margottini, moored inside the naval base of Taranto, the ceremony for the rotation of the command of the device will take place Standing NATO Maritime Group Two (SNMG2), one of NATO's two permanent naval groups incorporated within the Standing Naval Forces (SNF).

In the presence of the chief of staff of the NATO Maritime Command (MARCOM), Division Admiral Francesco Milazzo, Rear Admiral Mauro Panebianco will hand over the post to the US Rear Admiral Micheal Sciretta after almost 7 months of mission as tactical commander of the NATO group.

Rear Admiral Mauro Panebianco assumed command of the naval group on 17 December 2021 and in almost 7 months of activity the device has integrated units from various Allied countries including Spain, Turkey, Canada, Greece, United Kingdom, France and the United States , ensuring a continuous presence and a high level of readiness within the Mediterranean waters and participating in various exercises including the recent Open Sea 22-1.

The units of the Regional Command West, framed under the Piedmont Cavalry regiment (2nd) of the Army ...
2005
Read

Nave Thaon di Revel, the last ship delivered to the Navy, left on 12 August from the port of La Spezia to ...
2103
Read

In the afternoon of August 8, an anti-piracy and Maritime exercise took place in the waters of the Gulf of Aden ...
746
Read

It took place yesterday in the Italian Headquarters of Shama, named after Lieutenant Andrea Millevoi (MOVM), in the presence ...
254
Read

With the return respectively to the ports of La Spezia and Taranto, Nave Vulcano, under command of ship captain Alberto ...
721
Read

Production of electricity through the supply and installation of a photovoltaic system to power a ...
167
Read

At the command of the 1st infantry brigade of the Lebanese Armed Forces (LAF), the closing ceremony took place ...
406
Read

On the afternoon of Thursday 28 July, with the arrival at Malbork Krolewo airport of the four Eurofighter F -...
468
Read

With the embarkation, from the port of Bari, of the first tactical and logistic vehicles, as well as of the logistic materials, ...
10397
Read