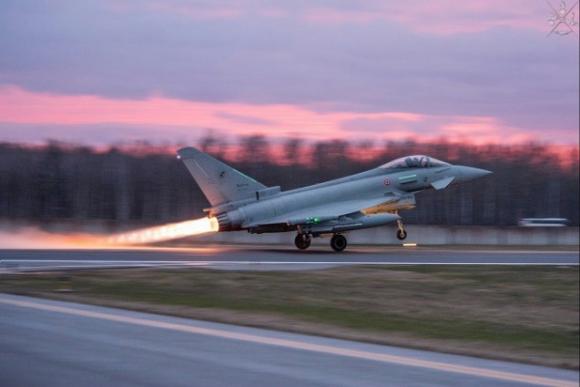 Two Eurofighter fighters yesterday afternoon Typhoon Italians of the Task Force Air Šiauliai, deployed in Lithuania, were activated with a "scramble" order from the NATO Air Operations Command and Control Center (CAOC) based in Uedem (Germany), to intercept a transport aircraft that it was traveling within the Baltic airspace, without the intended flight plan.

The two aircraft, once received the immediate alarm order, took off in a few minutes, following all the procedures provided by NATO, and reached and identified the airplane that was passing through the skies that fall under the control of the Italian mission.

A few days before the end of the mission in Lithuania, scheduled for next 30 April, with the baton of the command of the operation that will pass from Spain to Spain, the TFA-Šiauliai has completed the 37th scramble since the beginning of its mandate , responding to 100% of activations.

The TFA-Šiauliai, deployed on the Lithuanian base of Šiauliai from 1 September, sees the use of Eurofighter aircraft Typhoon of the 4th, 36th, 37th and 51st squadrons of the Air Force.

Operations of Air Policing they are conducted in favor of nations that join NATO but lack air defense capabilities.

Therefore this service is guaranteed through the rotational support of the air forces of the other allied countries.

The Air Force participates continuously in the operations of Air Policing since 2004, and has already been engaged in Lithuania in 2015.

L'Air Policing it is carried out within the area of ​​responsibility of the NATO Allied Command Operation (ACO) based in Brussels and is coordinated by the Headquarters Allied Air Command in Ramstein (GER).

The units of the Regional Command West, framed under the Piedmont Cavalry regiment (2nd) of the Army ...
104
Read

Nave Thaon di Revel, the last ship delivered to the Navy, left on 12 August from the port of La Spezia to ...
1887
Read