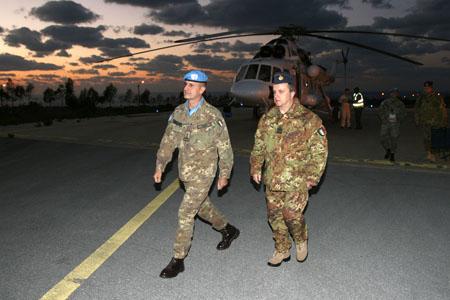 Naqoura, 04-05 February 2014, Air Force General Roberto Corsini arrived on an official visit to the UNIFIL mission, where he was received by the Commander, Division General Paolo Serra, at the Naqoura military base.

During his brief visit, General Corsini was updated on the operating situation in Lebanon and met the Italian Air Force personnel present in the theater, addressing them with a greeting address. During the meeting, the General highlighted how the team spirit and the high professionalism, demonstrated both in an inter-force and multinational context, have contributed to the achievement of excellent results in carrying out the tasks defined by the 1701 Resolution of the Security Council of the United Nations.

In the rest of the visit, General Corsini flew over the blue line and visited the Italian-led 1-31 Advanced Base.

Joint training between UN quotas was conducted from 13 to 17 January - in particular ItalBatt ...
276
Read

Standing NATO Maritime Group 2 returned to the sea after the winter break. The Naval Group, consisting of four ...
447
Read

Two days of study ended in recent days in Niamey, as part of the mission in Niger MISIN, ...
258
Read

Start of intense year for Civil and Military Cooperation (CIMIC) activities in favor of the Kosovar population ....
472
Read

The commitment of the Italian contingent of Resolute Support continues, currently based on the 132nd armored brigade "Ariete" at ...
188
Read

Yesterday Carabiniere Ship left from the naval base of Taranto for an operational deployment of six months in the role of ...
1530
Read

Operational readiness, reactivity, interoperability, flexibility of use, ability to cooperate, effectiveness in ...
824
Read

In the mission in Afghanistan, the Italian contingent of "Resolute Support", currently leading 132nd brigade ...
94
Read

As part of the mission in Niger, the first training course was held in recent days ...
151
Read