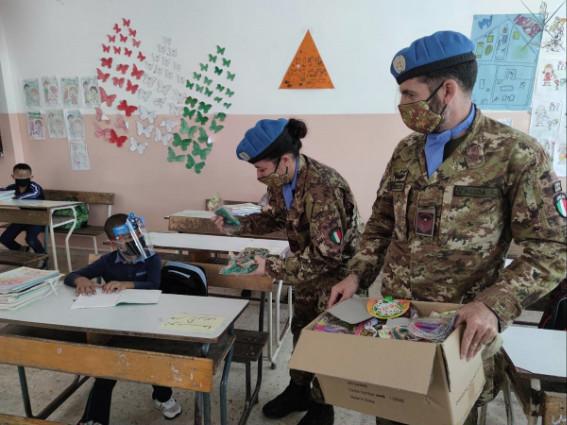 With the beginning of the school year, conditioned also in Lebanon by the serious health emergency in progress, the specialists of the civil-military cooperation of Italbatt, the maneuvering unit of the Italian contingent based on the 3rd bersaglieri regiment of the brigade Sassari, donated school materials to the pupils of two institutes of the Union of Municipalities of Tire.

Meeting the requests of the didactic directors and the municipal authorities, the material - backpacks, cases, markers, notebooks and toys that were collected in Italy thanks to the generosity of Italian associations and companies - was delivered to two public schools in Tire, attended by children from the poorest neighborhoods of the city.

The director of the public schools of Tire, Iman Joumaa Assamra, attended the delivery ceremony.

Supporting local authorities and re-establishing conditions for population support are among the main tasks assigned to UNIFIL by United Nations resolution 1701, together with monitoring the cessation of hostilities and supporting the Lebanese Armed Forces.

More than 4 tons of pasta were distributed by the soldiers of the Italian contingent of UNIFIL to two houses of ...
33
Read

100 days were particularly intense those just passed by the European contingent in Somalia, in which it is ...
564
Read