Lebanon: "Day of remembrance of military and civilian fallen in international missions for peace" celebrated 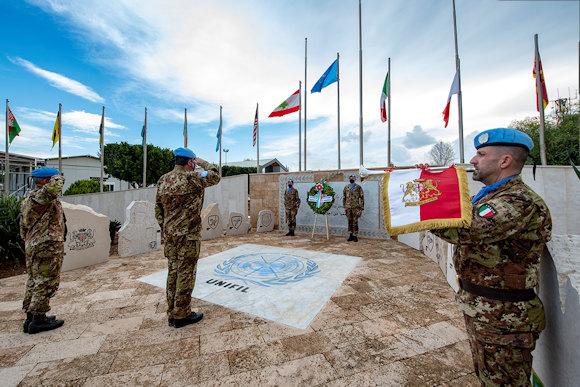 The Italian contingent of Unifil, the United Nations Interposition Force deployed in South Lebanon, today celebrated the "Day of Remembrance of the military and civilian fallen in international peacekeeping missions".

The solemn anniversary was commemorated in the "Millevoi" base in Shama, headquarters of the West sector of Unifil, during a short ceremony during which honors were paid to the fallen, a laurel wreath was placed at the foot of the monument to dedicated to them and observed a minute of meditation accompanied by the notes of "Silence".

Established to celebrate the memory of the Italian military and civilians who lost their lives in the fulfillment of duty in various countries of the world in missions abroad in support of international peace and security, the date of November 12 coincides with the 17th anniversary of the Nassiriya massacre, the terrorist attack perpetrated in Iraq against the Italian contingent led by the "Sassari" brigade during the "Antica Babilonia" operation, in which 5 Army soldiers (including Captain Massimo Ficuciello and Chief Marshal Silvio Olla, both active in the Public Information office of the “Sassari” brigade), 12 carabinieri, 2 civilian compatriots and 9 Iraqis.

The West sector of Unifil, currently based on the “Sassari” brigade, is under the command of Brigadier General Andrea Di Stasio. The contingent includes over 1.000 Italian soldiers, including about 450 "Sassarini", who work together with peacekeepers of 15 nations (Armenia, Belarus, Brunei Darussalam, South Korea, Ghana, Ireland, Kazakhstan, North Macedonia, Malaysia, Malta, Poland, Serbia, Slovenia, Tanzania and Hungary).

Unifil's mandate is to ensure compliance with UN Security Council Resolution 1701 of 11 August 2006. The resolution provides for monitoring the cessation of hostilities between Israel and Lebanon, assisting the Lebanese government in exercising its sovereignty over the territory and in guaranteeing the security of its borders, in particular at the border crossings with the State of Israel. The Unifil mission also aims to assist the civilian population and support the Lebanese armed forces in security and stabilization operations in the area to prevent a return of hostilities and create the conditions for lasting peace.

100 days were particularly intense those just passed by the European contingent in Somalia, in which it is ...
561
Read