Home News armed forces Missions Lebanon: Blue Helmets in support of the am ...

Lebanon: Blue Helmets in support of the environment 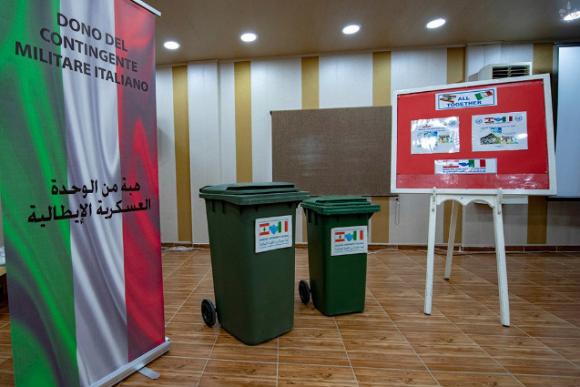 With the donation of 3.670 containers for solid urban waste to nine municipalities of the Unions of the municipalities of Tiro, Bint Jbeil and Tibnin, today an important project of the Italian contingent in Lebanon has been completed, aimed at improving the sanitary conditions of the villages present in the area of ​​responsibility of UNIFIL, the United Nations Interposition Force deployed in the southern region of the country.

In Lebanon, the absence of environmental legislation and a sustainable waste management plan has caused the proliferation of various forms of pollution for years, including the indiscriminate accumulation of waste in illegal landfills.

The delivery of the bins represents the last step of a journey begun in the first months of the mandate of the "Sassari" brigade in command of the West sector of UNIFIL, preceded by an information and awareness campaign on environmental issues that the Italian Blue Helmets have conducted in schools and local municipalities, paying particular attention to safeguarding the health of citizens through the good practice of separate collection, the first step to allow the collected materials to re-enter the economic and production cycle according to the principles of the circular economy .

Similar initiatives, much appreciated by the Lebanese authorities and carried out with funds from the Ministry of Defense, were coordinated by the civil-military cooperation specialists of the Italian contingent and involved projects relating to the collection, transport and treatment of waste (disposal or recycling) up to the reuse of waste materials to reduce the effects on human health and the impact on the environment, implementing an already consolidated work plan such as the construction of composting plants, the donation of compactors and means for collection and the transport of waste to disposal plants and, last but not least, the use of CBRN teams (Chemical, Biological, Radiological and Nuclear) specialized in detecting and sampling potential sources of pollution.

More than 4 tons of pasta were distributed by the soldiers of the Italian contingent of UNIFIL to two houses of ...
26
Read

Even a regional threat, such as piracy in the Gulf of Guinea, can have global repercussions, and is ...
306
Read

100 days were particularly intense those just passed by the European contingent in Somalia, in which it is ...
560
Read