The EULEX mission strengthens its contingent 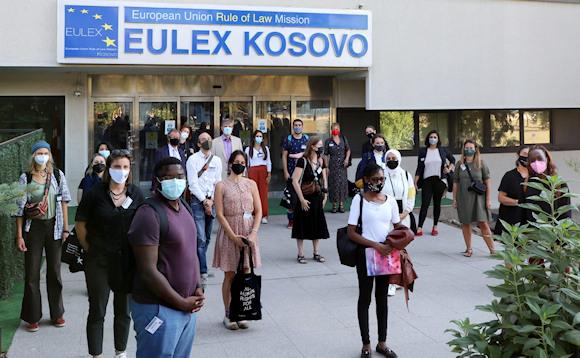 The first reinforcement team of the contingent of the EULEX mission is arriving in Fushë Kosovë in Kosovo. With the growing instability caused by the conflict in Ukraine, the Formed Police Unit it will be implemented with 92 reserve gendarmes from Italy (Carabinieri), Portugal and France.

Eulex, with the agents on the ground, has intensified the daily patrols in the north of Kosovo and with the deployment of the FPU Reserve it demonstrates that it will continue to show the determination of EULEX to continue to contribute and support the stability and security of the area.

As part of the European mission in Kosovo, we had the opportunity to interact with the head of the press and public information office and EULEX spokesperson, Ioanna Lachana.

EULEX (European Union Rule of Law Mission in Kosovo) currently Swedish-led, established in 2008, it is the largest mission in the European Union's common security and defense policy. Its main task is to support the institutions of the rule of law in Kosovo on their path towards greater sustainability, multi-ethnicity and responsibility.

The mission, in which ten Italians also take part, is made up of both civilians and police officers and implements its mandate through two pillars: that of monitoring and operations support. The mission is dedicated to the inclusion of human rights and gender equality. 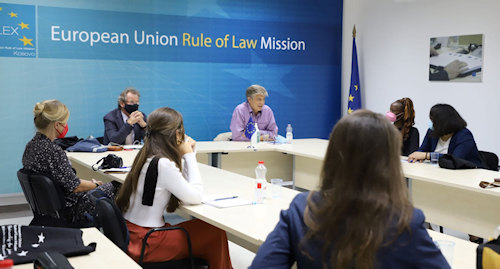 The monitoring pillar closely observes the Kosovar justice system from a procedural, legal and human rights point of view by carrying out rigorous assessments on the merits of criminal and police cases.

"In the four-year period 2018-2021, 1054 criminal and civil judicial sessions were examined on cases of war crimes, gender-based violence and corruption, followed by reports for local authorities aimed at highlighting and therefore improving the judicial system. In the same period, the mission staff made hundreds of visits to prisons and meetings with the KCS (Kosovo Correctional Service) in order to train managerial staff able to face and contrast the interference and preferential treatment of detainees and to focus more on the rehabilitation and reintegration of prisoners " summarizes EULEX spokesperson.

In Kosovo there is a security response mechanism on three levels: FPU (Kosovo Police Unit) made up of 105 Polish agents, EULEX and K-FOR (NATO-led international force whose task, as required by the resolution of the Council of UN Security 1244, is to help ensure a safe and secure environment and freedom of movement in Kosovo).

"A joint exercise was held between K-FOR and EULEX on February 22 in Pristina in which it was possible to simulate scenarios in order to test the most delicate aspects of crises and conflict management in a hostile environment and to verify the response level in emergency management in a coordinated way between international security organizations. The command and control and communication procedures between the two entities were also tested in order to make cooperation more effective and efficient. "

The mission interfaces with Kosovo's institutions, society and internal structures. A advisor supports cooperating units in order to ensure that all activities are designed in accordance with recognized international standards on gender equality.

Dr. Lachana also reports that "Regarding COVID-19, our Mission published a" Special Report on the Impact of COVID-2021 on the Rule of Law in Kosovo "in May 19, covering the period from March 2020 to March 2021. The report has identified the challenges faced by the judicial system and the penitentiary service during the coronavirus pandemic and offered concrete and actionable recommendations so that the Kosovo rule of law system better responds to the ongoing health crisis ".

To date, the mandate has been extended until June 2023 and it is very likely that it will be renewed further.

The frigate Carlo Bergamini returned to Taranto on 2 July at the end of a long period of assignment ...
204
Read

With the participation of gen. ba David Morpurgo, deputy commander of the DACCC of Poggio Renatico, at the Distinguished ...
207
Read