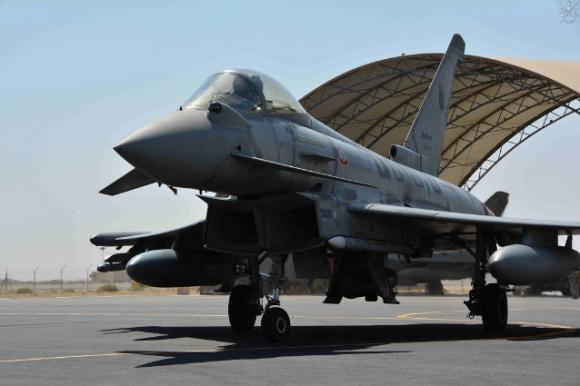 3.000 flight hours for the Coalition Inherent Resolve, with approximately 10.000 points of interest recognized, is the important milestone reached by the EF-2000A of the Task Group Typhoon, deployed again in Kuwait last April, in alternation to the Tornado of the “Devil” Task Group, but for the first time at the Alì Al Salem air base, where infrastructural and logistical adjustments were implemented to meet the needs of the “Typhoon” Task Group.

The 3.000 flight hours were achieved just a few weeks after the return to Kuwait of the Italian EF-2000s, which immediately demonstrated their full operational capacity when operating Local Area Orientation and cooperation with American troops (US Air Force, US Army, Marine Corps, Navy), through the organization of exercises Joint reconnaissance and close air support at the air / ground shooting range, under the control of Joint Tactical Controller.

A result of the air superiority characteristics of the EF-2000A weapon system, extremely versatile and reliable attitude, and of the sophisticated aerotactic reconnaissance pod Reccelite II, which allowed the acquisition of an impressive quantity of very high resolution images relating to points of interest for the Coalition, from which, thanks to the activity of the photo-interpreter analysts and the intelligence personnel of the Italian contingent, data and information were extracted fundamental for the conduct of the Transactions.

The overall contribution to the operations conducted by theItalian National Contingent Command Air (IT NCC AIR) for the Coalition, also taking into account the previous activity carried out by the Task Groups "Devil", "Black Cats" and "Perseo", currently alternating in the Operational Theater, counts thanks to the contribution of the Italian EF-2000As over 38.000 flight hours, approximately 7.000 sorties and more than 31.500 reconnaissance targets.

The first operational flight of the Euro Fighter in the operation Inherent Resolve was the occasion for the commander of theItalian National Contingent Command Air, Colonel Luca Giuseppe Vitaliti, to enthusiastically accept the request received from the commander of the 386th Air Expeditionary Wing of the USAF to be able to assist, together with American personnel and directly from the flight line, to the pre-flight checks and take-off towards the skies of Iraq of Italian aircraft, amicably defined by the local Coalition Partners as the "Amazing Typhoons".

The frigate Carlo Bergamini returned to Taranto on 2 July at the end of a long period of assignment ...
210
Read