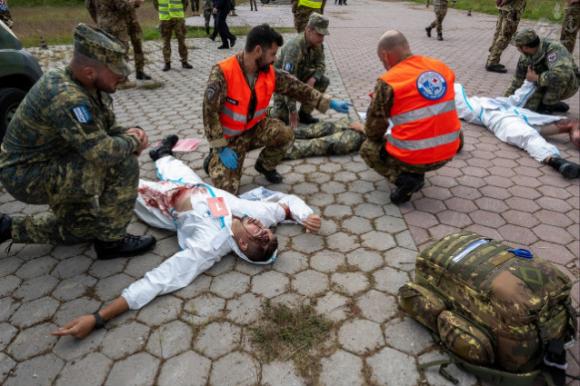 An activity dedicated to testing the procedures related to an accident event in the base, then to maintaining the readiness of the units and teams of all contingents involved.

The scenario at stake was a helicopter disaster to be managed with a derivative impact and fire, which hit the soldiers. The guard on duty, a health team with an incorporated doctor and the Fire Brigade immediately intervened on the spot, through the coordination and communication of the RC-W operations room.

A MASCAL was then declared and combat triage began. The Military Police, the medical means and the Rapid Reaction Force reached the scene and applied the foreseen procedures, providing support, isolating the area and facilitating the evacuation of injured personnel, to ROLE 1 of RC-W.

Il senior medical incident commander, OF-4 Simone Rolfo belonging to the regiment Piedmont Cavalry (2nd), managed the medical and paramedical staff, treated the patients and in coordination with the K-FOR PECC (Patient Evacuation Coordination Cell) evacuated 3 red, 1 yellow and 8 green cases, while the MP collected the evidence of 5 dead people.

With a fruitful effort and the commitment of all the means available at the base, the event was solved in just over an hour. All the activity was supervised and certified by the JMed of K-FOR HeadQuarters in Pristina.

This occasion was considered an appraisal and testing phase to verify the flow chart of the actions undertaken and the procedures, and then possibly improve some steps, as underlined by the RC-W staff during theAfter Action Review, through the lessons identified and learned.

At the headquarters of the Engineering Regiment in Beirut, in the presence of Colonel Farhat of the training directorate, of the...
82
Read

The training activity saw the units of the Battle Group Bulgaria engaged which, within the Novo Selo Training ...
207
Read