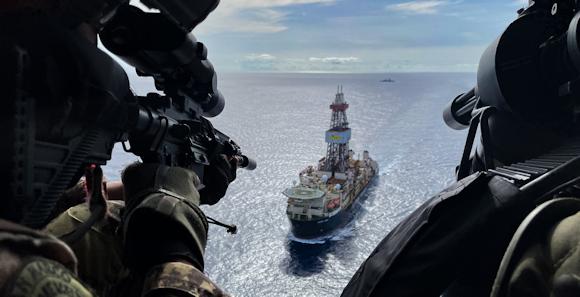 In recent days, as part of the operation Gabinia, Ship Luigi Rizzo guaranteed the safety of the "ENI-SAIPEM 10000" oil drilling unit.

The freighter, which is part of the fleet of the Saipem company, owned by the ENI group, operates all over the world in on-shore and off-shore areas, sometimes even particularly hostile, and carries out, also on behalf of the well-known Italian oil company, important campaigns of drilling. At the time of the activity with Nave Rizzo, SAIPEM 10000 was engaged in repositioning operations for subsequent exploration of the marine subsurface off the coast of Ghana. It is therefore a delicate activity for the entire national energy sector, with inevitable repercussions also on the European economy.

And it is precisely on the occasion of this joint navigation that the Italian companies and the Navy wanted to verify the national alarm chain. In an extremely realistic scenario, off the Ghanaian coast, an attempt to seize the oil unit by a group of pirates was simulated, following which the national alarm sequence was activated and, therefore, the intervention. FREMM by SH-90 helicopter. At the same time, on board the aircraft, the intervention team of the marine brigade Saint Mark has ensured protection, support and assistance.

A precious joint event that is inserted in the bed of the training windows periodically conducted by the command in charge of the naval team, in order to ensure a high level of operational readiness, as required by the primary tasks entrusted to it, namely the defense of the country's vital interests, especially in an area afflicted by the growing phenomenon of piracy.

The frigate Carlo Bergamini returned to Taranto on 2 July at the end of a long period of assignment ...
229
Read

With the participation of gen. ba David Morpurgo, deputy commander of the DACCC of Poggio Renatico, at the Distinguished ...
213
Read