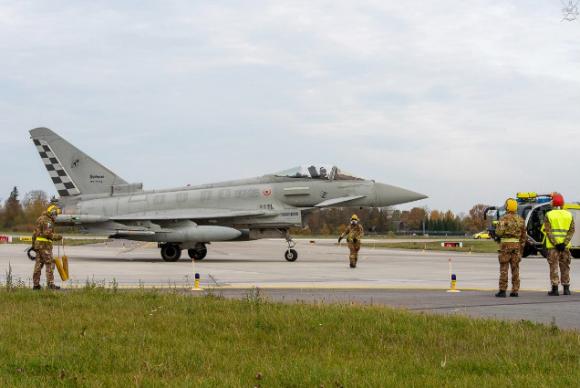 On the morning of October 4, a joint training event with the emergency teams of the Air Base, called “Hot Brakes”, took place at the Military Airport of Ämari (Estonia).

The activity, relating to Flight Safety, provided for the simulation of an aircraft failure during landing such as to require the intervention of the emergency teams. In such situations, the approach to the aircraft must take place by implementing specific procedures aimed at ensuring the timeliness of the intervention while respecting the safety of the teams themselves.

The training activity was conducted in order to strengthen the interaction between the flight crews and the ground staff, Italian and Estonian, by achieving optimal cohesion between the different components and greater fluidity of interaction. This need becomes even more crucial for flying groups when they are deployed at allied airports, as is the case with the Italian F-2000s which, since 15 September, have continuously ensured the protection of the skies of the three Baltic Republics, in the scope of the mission NATO enhanced Air Policing.

The "Hot Brakes" made it possible to consolidate the techniques to be used in an emergency situation after landing, training flight crews and ground emergency teams in the correct execution of intervention procedures, as required by NATO directives in force. The high professionalism of all the participants allowed the Italian and Estonian personnel to operate in full synergy throughout the training event.

The activity is part of the initiatives aimed at developing in a cohesive way the different professionalism, knowledge and experience of the personnel of the different Aeronautics that are part of the Atlantic Alliance, to strengthen their integration and interoperability, elements necessary to fulfill effectively the mission of Air Policing in the Region, considering the constant rotation of different aircraft at the Ämari Air Base.

In the presence of the air squad general Nicola Lanza de Cristoforis, deputy commander of the Operational Command of ...
519
Read