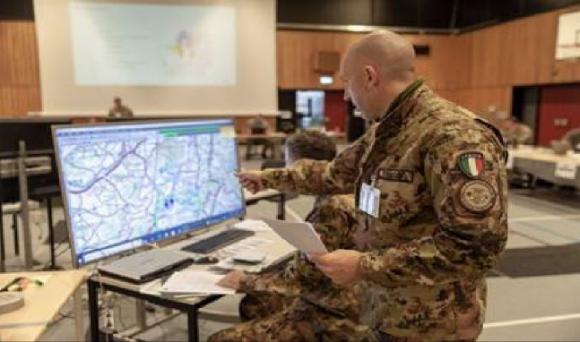 The event, a simulation of CBRN contamination (Chemical, Bacteriological, Radiological and Nuclear), took place in buildings normally dedicated to the cadets of the Danish school which, for the occasion, were set up as a command and control center for supervision of the simulated event.

Personnel of the Italian Air Force and the Italian Army, together with operators from other 17 Nations, trained to deal with a scenario characterized by CBRN contamination in order to verify the readiness levels, the logistical and operational arrangements and to test the procedures of intervention of units from the various participating nations.

In fact, it was possible, within specific simulated scenarios, to increase the level of interoperability in a multinational context, to verify and update intervention methods and procedures, from the processing of communication flows to the definition of the location of the event up to identification of the type of contamination and therefore of the aggressive used (in the case of a Biological or Chemical attack) or of the energy used (in the case of a Radiological or Nuclear accident). The data and information collected were processed through a special dedicated software that provided valuable information to the CBRN operators of the Command and Control chain to identify the threat and the military / civil units to intervene in the field for decontamination and monitoring.

This year's edition was attended by 17 Nations that collaborate with the Atlantic Alliance in specific areas of interest such as Euro-Atlantic Partnership Council (EAPC), Istanbul Cooperation Initiative (ICI) and Partner across the globe.

For Italy, 37 CBRN specialists from different departments of the Italian Air Force participated (including the 3rd wing of Villafranca where the main assets and capabilities of CBRN Air reside) and an operator of the Italian Army from the CBRN Area Control Center (CBRN ACC), the top body of the National Military Network for the observation and reporting of CBRN events, part of the NBC Defense Joint Force School of Rieti.

To underline the importance of the event, the visit of the Danish Defense Minister Morten Bodskov who went to the various branches used in the different phases of the exercise.

The current context Joint, combined ed Interagency and participation in national and international exercises, in fact, increases the level of interoperability, preparation and intervention capacity of the Air Force personnel in CBRN events, both in the national territory and in the operational theater, not only for their own tasks peculiar, but also, in collaboration with the Defense and other resources of the country, for the safety and protection of the community from possible accidents, in relation to natural disasters or pandemics.

The 3rd wing, specifically, thanks to the sophisticated technologies of the vehicles supplied and the experience gained in international training contexts, represents excellence in the sector Air-CBRN and is internationally recognized as one of the most expert in decontamination of both military and civil aircraft and vehicles, so much so that it is responsible for carrying out courses for the achievement of CBRN qualification for AM personnel.

The frigate Carlo Bergamini returned to Taranto on 2 July at the end of a long period of assignment ...
255
Read

The medical support activities (MEDICAL CARE) that the Italian contingent in Lebanon are carrying out in ...
54
Read

With the participation of gen. ba David Morpurgo, deputy commander of the DACCC of Poggio Renatico, at the Distinguished ...
217
Read

In the presence of the air squad general Nicola Lanza de Cristoforis, deputy commander of the Operational Command of ...
868
Read