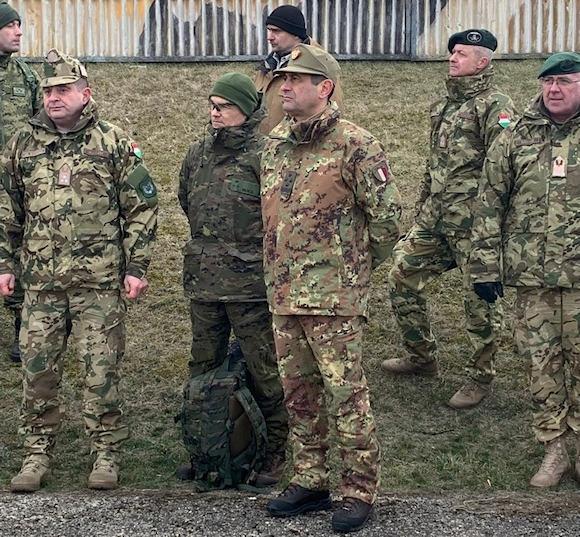 In recent days the commander of the Interoperable Summit Operations Command (COVI), general of the army corps Francesco Paolo Figliuolo, went to Hungary to meet the men and women of the operation Eastern Shield and Multinational Division Center (MND-C), engaged in operational and training activities.

The visit was an opportunity to meet the Italian military representative to the NATO and EU military committees, air squad general Roberto Nordio, the chairman of the NATO military committe, Admiral Rob Bauer and the Chief of Defense Hungarian, General Romulusz Ruszin-Szendi.

General Figliuolo visited the headquarters of the operation's headquarters Eastern Shield, which sees the Hungarian Armed Forces operating along the national border in support of the Ministry of the Interior in controlling the flow of migrants from Eastern Europe.

Subsequently, the senior officer went to the Ukrainian border, in the town of Fehérgyarmat, home of the Task Force Charlie, one of the units deployed such as Second Responder after the Police, mainly engaged in humanitarian activities in favor of refugees from Ukraine.

Near the city of Várpalota, General Figliuolo attended a briefing on the Multinational Division Center (MND-C), which has now reached the Initial Operational Capability (IOC).

Subsequently, he attended the final phase of the LIVEX fire exercise which saw Hungarian light, medium and heavy infantry units engaged on the ground, supported by attack helicopters, artillery, mortars and fixed-wing aircraft for activities of Close Air Support (CAS)

The activities concluded with a farewell salute to the Hungarian military and to the group of observers of the Italian Army present at the training event.

The frigate Carlo Bergamini returned to Taranto on 2 July at the end of a long period of assignment ...
204
Read

With the participation of gen. ba David Morpurgo, deputy commander of the DACCC of Poggio Renatico, at the Distinguished ...
207
Read