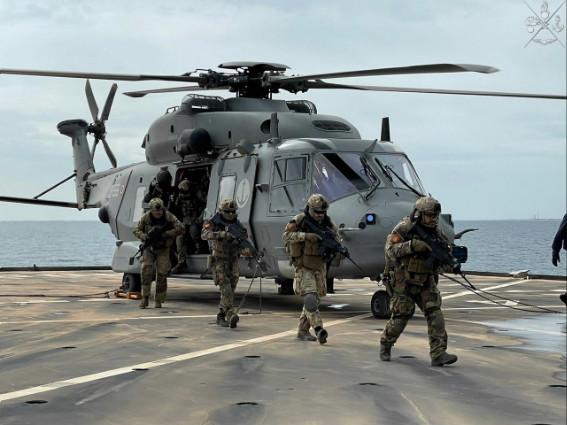 In recent days, the international amphibious exercise "GRUFLEX 22" (Grupo de la Flota Exercitacion) was held in various Spanish training areas located between the Mediterranean and the Atlantic Ocean, in which the PTC (Permanent Training Company) took part. ) of the "Serenissima" lagoon regiment of the Army, part of a tactical group, based on a marine brigade Saint Mark (BMSM) and embarked on the “San Marco” ship.

During the exercise, the personnel of the lagoon regiment participated in training activities conducted on board the ship, together with the soldiers of the BMSM and the assault helicopter section.

The advertising activities through Fast-Rope from NH90 of the Navy, those of combat in compartmentalized environments inside the ship and the rehearsal on the procedures of the amphibious combat role.

The beginning of the CET-FIT (Combat Enhancement Training - Force Integration Training) phase of the exercise saw the lagoons conduct a joint helicopter raid with BMSM personnel at the Alvarez di Sotomayor shooting range, carrying out the cordon an inhabited center in support of the Spanish units. Subsequently, the planning phase for the TACEX (Tactical Exercise) took place with the aim of conducting an amphibious intervention to take possession of a functional strategic industrial infrastructure for the procurement of raw materials in neighboring countries.

The planning phase, shared between the lagoon assets and the BMSM, required particular amalgamation and integration between the personnel involved, allowing the consolidation of synergies between the various components of the National Projection Screening Capacity (CNPM) and carrying the Landing Force to develop a joint maneuver in its Area of ​​Operation.

With the subsequent TACEX, the conduct phase saw the lagoons disembark jointly with the Spanish amphibious units on the jagged oceanic coasts of Sierra del Retin, by means of GIS landing vehicles, in synergy with helicopter operations, allowing the rapid deployment of forces on the ground and the continuation of land operations, until the full achievement of all the training objectives set.

At the end of the tutorial, a After Action Review conducted on the ship "San Marco" during the return journey to the port of Brindisi, allowed to analyze and consolidate the procedures to be implemented by the amphibious assault infantry units of the Italian Army which, together with the brigade " San Marco ”of the Navy, are part of the Projection Force from the sea.