"San Lince": born and tested again in the field 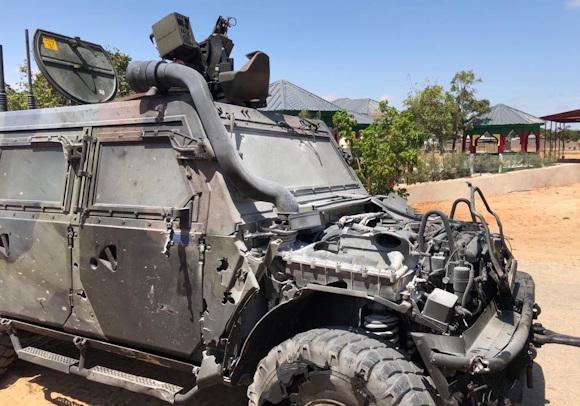 We have emphasized all the merits without discounting the shadows that circulated on the first series of the VTLM Lince, shadows once confessed only by some ex-military and rarely reported in the press.

Regardless of how you want to turn it, its main task, namely safety, is the element on which everyone, even abroad, converges in claiming that Iveco Lynx VTLM is the safest armored light multirole.

As we have already reported, for the record, the criticisms towards the first series were mainly aimed at performance rather than the quality of certain details, such as door hinges, braking system or suspension and suspension.

We also had the opportunity to try it in the light version - unique in the world, Lince by Ferrari - just to understand some aspects and, as already reported, it turned out to be a cross between an average truck and an off-road vehicle, and in its running it is necessary not to be fooled by the SUV type car line but rather, it is good to maintain a truck-like driving style.

His military nickname, San Lince, was not coined by chance and another testimony on the quality of its cell - innovative with respect to the American MRAP platform - has unfortunately arrived after the new attack on our soldiers present in Somalia.

According to the press release of the Defense General Staff, the September 30 in Mogadishu in Somalia, at Villa Gashandigha - headquarters of the Somali Ministry of Defense - two of the three VTLM armored personnel transport vehicles were involved in a violent explosion generated by a homemade IED device. The convoy was transporting the Italian soldiers employed in the EUTM European Union Training Mission activity and, again from the news of the SMD press office, there would be no Italian victims following the explosion. 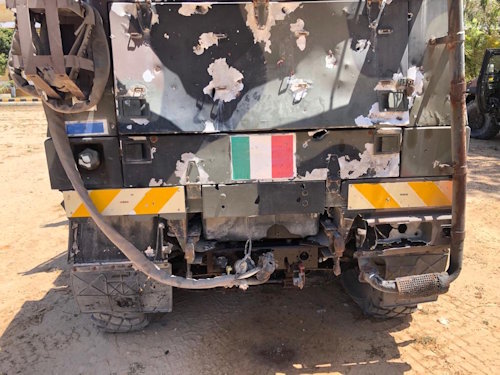 The high temperatures of the blast, albeit artisanal, dissolved the soil present by projecting it with the shock wave on the armored crystals clouding them, but also on the entire surface of the VTLM.
Surely inside there will have been a violent backlash followed by a shock that makes you dramatically understand that this time it really happened to you.

Iveco Lince, as per the manual and in relation to the intensity of the explosion, released some of the components closest to its shape during the deflagration to cushion the incandescent shock wave, such as the bonnet and some panels, holding onto its structures all debris thrown from the gas and air sphere at supersonic speed. The run-flat tires oriented towards the explosive sphere ripped open due to heat and perforations and - just to give an idea of ​​the strength of the VTLM structure - only the front solid steel bull bar was pierced by splinters. In short, an excellent protection if we examine some upper class armored vehicles involved in an explosion.

Nothing has penetrated inside, according to the news, however the military protocols after an attack understandably foresee a sort of clinical pit stop for the personnel involved.

A bad blow for our soldiers, to whom all our solidarity goes as always, but at the same time another note of merit for the engineers of Iveco Defense Vehicles, a reality isolated from the Iveco sector, to which advertising is not necessary to prove in the world the quality of its products.

Although not confirmed, following these events - a bit like Volvo did to ensure the safety of its cars -, an examining commission carries out scrupulous surveys on the post-explosion structure to increase safety.

There is rather to wonder, to conclude this dutiful passage of news, if the billion and 428 million financed for the missions is still necessarily endorsed by vital needs, shareable if it is to establish the individual freedom of peoples and their democracy but questionable if in some cases the real causes and the interests that have generated destabilization and wars are clearly examined at the expense of civil and military.

Iveco Lince LMV: the Italian feline who has school in the world. Between lights and shadows

Iveco Lince VTLM: what has not been said

Pecunia non olet says the famous Latin brocardo, sometimes quoted out of turn but truthfully. And it's a question ...
5402
Read

According to Treccani, in Ancient Rome, a veteran was a soldier who, after having fought for a certain number of ...
9173
Read

They had already announced it in the bilateral meeting in Naples last February. On that occasion the president ...
16857
Read

For two consecutive days, last February, China sent its strategic bombers over the Straits of ...
4203
Read

History teaches us that maritime routes are fundamental for the economy and, starting from the XNUMXth century, indispensable ...
5523
Read