The seizure of oil tankers: the tension in the Strait of Hormuz still rises 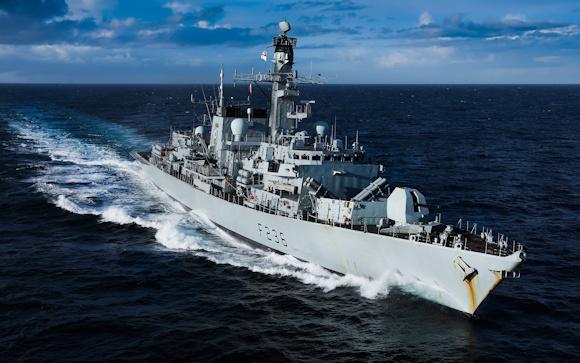 Tension continues to rise in that area now defined as the world oil crossroads. On July 11, Britain denounced an attempt by naval forces of the Iranian Revolutionary Guards to prevent the transit of one of its oil tankers, the British Heritage of the BP company, across the Strait of Hormuz. On that occasion, three Pasdaran vehicles would try to induce the ship to stop, but the HMS frigate's prompt intervention Montrose (photo) of the Royal Navy, he would have averted the blocking of the oil tanker by interposing himself between it and the Iranian fast vehicles. CNN, also citing Iranian military sources, also explained that the warning by the British navy was not limited only to the words: against the Iranian ships the cannons of the Montrose, a much more powerful and armed unit than the Iranian motorboats, which would thus have been forced to reverse their course.

The British command has defined the action of the Revolutionary Guards "A provocation and an attempt to interfere with free passage" of the ship, while Foreign Minister Jeremy Hunt reiterated that London is constantly "Committed to maintaining freedomà navigation ". The episode briefly described here would also have been filmed by some US planes that would have taken the scene from above. Despite this, the accusation was flatly and totally denied by the Guards of the revolution, the powerful armed force that responds only to the Supreme Leader, Ayatollah Ali Khamenei, who indeed has increased the burden by stating that if they ever decided to seize foreign ships, their means "They would have been able to lead the mission smoothly, decisively and quickly".

The "alleged" Iranian attempt to intercept a British oil tanker in the Persian Gulf is just the latest episode of an escalation of tension in the area: between May and June six oil tankers were attacked and on those occasions, even without irrefutable evidence, the US immediately accused Tehran. Iran then shot down an American drone near the Strait of Hormuz, risking a missile attack that Trump stopped only at the last moment. The game then continued with the entry of Great Britain. 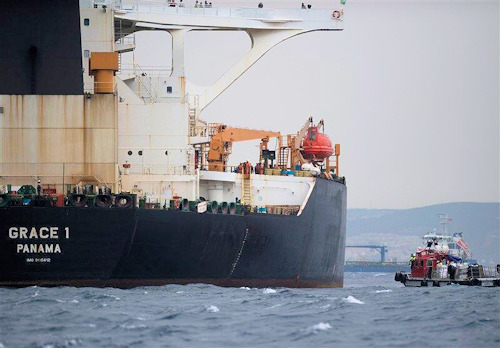 The recent episode appears in fact as a direct, almost announced consequence of Tehran's threats to stop a week ago from His Majesty's forcesà of his tanker Grace 1 in Gibraltar, where it was decided the seizure for 14 days of the ship and all the crew was questioned by the local authorities about the cargo, almost 300.000 tons of crude oil, which would have been directed towards Damascus. The suspicion is that the oil tanker, which left the Gulf circumnavigating Africa, intended to reach Syria to deliver its cargo in violation of European sanctions against the regime of Bashar al Assad.

Spanish sources, whose government disputes British control of Gibraltar, had indicated that the tanker had been blocked by units of the British Navy at the request of the United States. On this occasion the Iranian president Hassan Rohani, after having clearly asked for the immediate release of his tanker, had threatened "repercussions" for an action that the Islamic Republic defines an act of "pure and simple piracy" which took place also in waters internationals, stressing also that they do not feel obliged to adapt to the restrictive measures of Brussels against its ally Damascus. “It was you who made the commercial communication lines at sea and more insecureà you will see the consequences " said Rohani adding that "The enemy aims at weakening security in the region". The president here refers to the American drone shot down last month with an "incisive response" from Iran.

Whatever the truth, we are certainly faced with statements that inevitably lead to further increasing the tension in one of the places today crucial for the world trade in crude oil. Thus, while on the one hand London raises the alert for its ships in the Gulf to the highest level, on the other Iran again raises its voice towards that block of States formed mainly by America, England and Israel aimed at discrediting it and isolating it both economically and politically.

The latest incident follows the announcement by the US president of increasing sanctions against Iran as soon as possible and "substantially" as part of Washington's plan to curb Tehran's nuclear activities. The United States itself then re-launched the desire to create a coalition of countries, coordinated by Washington, in order to guarantee the safety of commercial ships in transit in the Persian Gulf and in the Bab al-Mandab strait, at the entrance of the Red Sea. 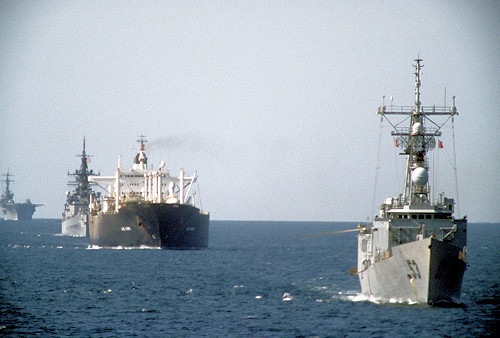 The operation is being defined in these hours: according to the plan of the naval coalition, the United States will supply the command ships and will lead the surveillance while the allies will patrol and escort the commercial ships with their national flags.

It seems a sort of re-edition of the strategy adopted in halfà of the 80 years, when in the Gulf there was the so-called "tanker war", one of the fronts of the Iran-Iraq conflict. In that affair Italy played a leading role with the 18 Naval Group consisting of 3 Fregate, 1 Ship Supporting Underwater Operations (Anteo Ship) 3 cacciamine and 1 Team Supply Ship. The command of the 18 naval group was entrusted to the most brilliant admiral of the moment: rear-admiral Angelo Mariani who did not disappoint expectations even from the media aspect.

The mission was a success so full as to contribute significantly to improving the image and the consideration towards the Italian Armed Forces in the international field. It was one of the last operations conducted in a "single service" regime without interference from today's suffocating inter-force bureaucracy. The teachings for the Navy were very many and have been valorised over time also in the realization of the ships of the naval law for example in the Multi-purpose Offshore Patrol boats, particularly equipped for the operations in presence of hybrid threat as that of the Persian Gulf.

The Biden Administration continues to supply the Ukrainians with artillery. After the 155 mm M-777 howitzers and, news ...
845
Read

As previously written, among the supplies of armaments sent by the Italian government, there are also howitzers / ...
71294
Read

To circumvent the limitations imposed by Congress, the Biden Administration employs its allies to provide ...
19375
Read

No war can be interpreted and explained through the "absolute" and necessarily abstracting lenses of ...
4548
Read

If it weren't serious, it would even be comical. People don't realize the significance and implications that ...
19288
Read

Reuters reports that the United States will provide Ukrainians with long-range anti-ship missiles. If that were to ...
46043
Read

Last month we witnessed the sinking of one or more Ukrainian Neptune anti-ship missiles in the Black Sea ...
37576
Read

The Russian Airborne Forces (Vozdushno-Desantnye Voyska rossii - VDV) - like the vaunted Spetsnaz, by the way ...
29666
Read

The supplies of military equipment by NATO and European countries to fighters continue in these days ...
27489
Read