Libyan Coast Guard under the control of Ankara 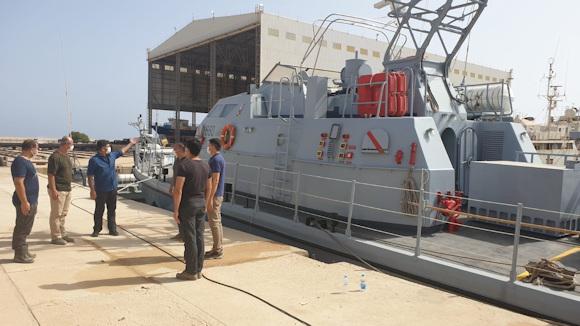 With a tweet, the Turkish Defense Minister has announced that Ankara's beloved forces have started training operations of the Libyan Coast Guard which is headed by the Government by national agreement (Gna), the only Libyan government recognized internationally, based in Tripoli. The operations are fully included in the category of "military and security support, consultation and training activities included in the agreement reached in November 2019 between the Tripoli gna and Ankara"1, it cannot escape that this event is a further Turkish thrust at our expense and yet another contempt for Italy.

In the photos attached to tweet, in fact, there are the ships that Italy in 2018 had donated to Libya following the agreement signed with the "first" Memorandum that would have provided for us to take charge of the collaboration with the Libyan Coast Guard, not only to keep the migratory phenomenon at bay in general, but above all to put a stop to the shameful trafficking of human beings. In particular, you can see the patrol boat Ubari 660, twin of the Fezzan 658, both of the class Corrubia.

In addition to the damage, also the insult of seeing our ships used for training that will lead another state, Turkey. While Erdogan brings Tripolitania back into the "Ottoman" sphere of influence, Italian absenteeism is confirmed as a consequence of a bewildered, powerless, lacking in authority, inadequate leadership. 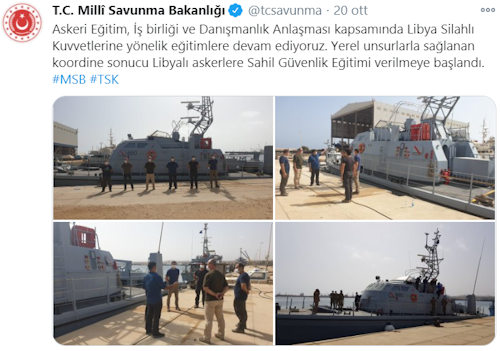 The Turkish initiative will certainly have a significant impact on the situation in the Sicilian channel, on the further expansion of the waters over which Libya claims its exclusive jurisdiction, with the implications connected with the exploitation of hydrocarbons and fish resources, in a sea that is always more out of control. It is also evident that the Libyan coast guard in Erdogan's hands was the missing link to be able to manage clandestine emigration and human trafficking to Italy at will, perfect for influencing the choices of the Government of Rome given the political sensitivity of the issue for the Italian ruling class, since the intervention of the Turkish president will heavily influence the flows of migrants and their control. In short, Erdogan will be the ruler of the destinies of the boats, something that he has been slowly but steadily implementing for months alongside the local coast guard with his navy.

If before the Turkish role was more "operational", now it is also "educational", that is, the Ankara military will also take care of the education of Libyan crews.

What was our prerogative has been taken away from us with disarming ease. Our strategic role crumbled. The value of the Missions Decree approved only last June (in which it was foreseen the strengthening of our expedition with the sending of additional men and vehicles as well as the setting up of a shipyard for the repair of the lookouts and a stable school for the preparation of the crews) reduced to zero . It was certainly no coincidence that the Italian ouster was formally consolidated precisely when a meeting was held in Rome with a delegation of the government of Tripoli, including the Minister of the Interior Fathj Bashaga. It is yet another Turkish initiative to demonstrate, indeed to flaunt Italian weakness in the eyes of the Libyans in the face of Turkey's incisiveness, returned as a protagonist in its ancient province, lost to the Italian hands in 1912. 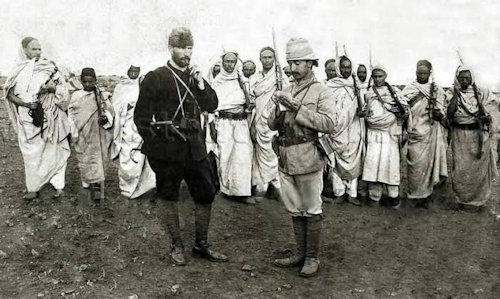 The Turkish spirit of revenge against Italy, as we read from the pages of "La Repubblica", is also made evident by the symbol that the military of the Turkish contingent in Libya have adopted and that: reproduces a famous photo of the young Ataturk, the father of modern Turkey, with a pipe in his hand, while leading (unsuccessfully) the defense of the Ottoman province of Libya against the Italians in 1911. In some of the coats of arms worn today over the uniforms, there is the Turkish name of the Libyan province of that time, with the date “1910”, ie before the victory of the Kingdom of Italy over the Ottoman Empire in the Italo-Turkish war (1911/1912). All under a sentence by Ataturk himself: “Soldiers, your first target is the Mediterranean. Come on!"2. Could Erdogan's aims be clearer than that?

In short, after having put the whole of Europe in check by obtaining the famous 6 billion euros that the EU has allocated for millions of Syrian refugees to remain in Turkey, now Erdogan has managed to acquire another blackmail weapon, control of the clandestine migratory flow of African migrants also thanks to the control of the Libyan Coast Guard. After all the effects on migrants are already counting: two massacres in two days. A small boat carrying 20 people was shipwrecked on 22 October, 30 miles from Lampedusa, in international waters. A fishing boat from Mazara del Vallo intervened saving 15 people: all Libyans who set sail from Zawyah. Among them also two children who have lost their mothers. The previous day off the coast of Sabratha, Libya, "at least 15 people died," explains the World Migrants Organization. In both cases, no Libyan patrol boats left the port of Tripoli3.

After having oscillated between the camp of Al Sarraj supported by the UN and that of Haftar supported by Egypt, France and Russia, as was predictable we were ousted from the first without earning the recognition of the second, as also demonstrated by the sad story of our fishermen. , still illegally detained and without formal charges by Haftar's forces. 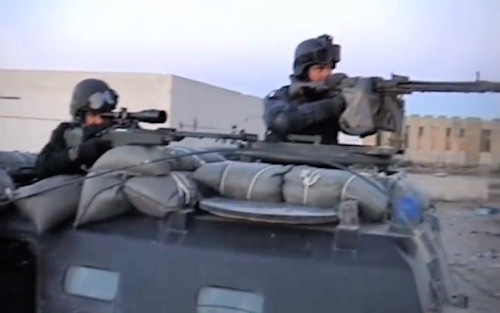 Could a different outcome have been possible for our policy in Libya? The answer is unfortunately yes. We should have and could have kept faith with the commitments made with the legitimate government of Al Sarraj, sending in time, progressively, men and means to protect Tripolitania. Utilize our ships for Tripoli anti-air defense and ground fire support, provide quality operational technical support with our Air Forces and Special Forces and logistical support to UN-backed Government forces against the warlord Haftar.

Paradoxically, while we have never hesitated to send our Armed Forces into combat in theaters of war, regardless of their actual relevance for national security, starting from Iraq (we recall the fierce fighting for the reconquest of the bridges over the Euphrates from part of the sailors of the Saint Mark and the soldiers of the Army - photo) up to Afghanistan, we did not dare to intervene in a context that is manifestly and unquestionably of primary interest for Italy. At Al Sarraj's request for help in time of need, we ran away, first running into Haftar's arms and immediately selling off two brand new ships to Egypt, or to the party opposed to Italian interests in Libya, with the result of weakening our Navy, just when the fleet should be strengthened, given the growing instability of the Mediterranean.

Political choices that have buried every residual Italian credibility in Libya in a few well-aimed blows, opening the doors to Erdogan. A very serious political responsibility whose consequences will reverberate not only on Italy for a long time. 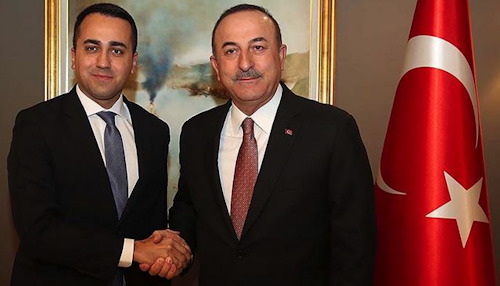 The mantra of the government: "weapons will not decide the fate of Libya" soon proved itself for what it was, an alibi to justify Italian inaction and irrelevance in foreign policy. In fact, it was Turkish weapons that stopped Haftar's assaults, breaking the siege of Tripoli and forcing the parties to seek a truce.

Strengthened by the result achieved on the field, Erdogan was thus able to negotiate with Egypt and above all with Putin in favorable terms for Turkey, essentially at the expense of Italy, considered, unlike the combative Greece, the soft underbelly of Europe.

Thanks to Italian politics, today Erdogan is in a position to question even the Berlin agreements on the future of Libya, also because by controlling the Libyan Coast Guard, he has the operational tools to be the "dominus" of clandestine migratory flows towards Italy . The nerve of the Italian political class and beyond.

The Biden Administration continues to supply the Ukrainians with artillery. After the 155 mm M-777 howitzers and, news ...
984
Read

As previously written, among the supplies of armaments sent by the Italian government, there are also howitzers / ...
71344
Read

To circumvent the limitations imposed by Congress, the Biden Administration employs its allies to provide ...
19385
Read

No war can be interpreted and explained through the "absolute" and necessarily abstracting lenses of ...
4549
Read

If it weren't serious, it would even be comical. People don't realize the significance and implications that ...
19300
Read

Reuters reports that the United States will provide Ukrainians with long-range anti-ship missiles. If that were to ...
46048
Read

Last month we witnessed the sinking of one or more Ukrainian Neptune anti-ship missiles in the Black Sea ...
37581
Read

The Russian Airborne Forces (Vozdushno-Desantnye Voyska rossii - VDV) - like the vaunted Spetsnaz, by the way ...
29674
Read

The supplies of military equipment by NATO and European countries to fighters continue in these days ...
27495
Read