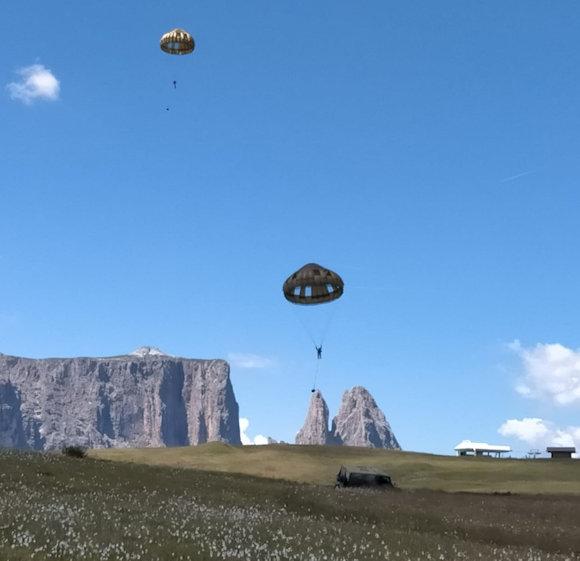 After a long period of experimentation by the "Folgore" brigade, the new EPC parachute has also come into operation in Italy (Ensemble de Parachutage du Combattant) acquired with a contract signed in 2017 between the Directorate of Aeronautical Armaments and Airworthiness of the Ministry of Defense and the French company Zodiac Aerosafety System.

The "Folgore" brigade had ordered in 2018 the precautionary block of the launching activity with the T10 controlled opening parachute following a large number of technical problems, causing the suspension of the aviation activity with the consequent negative impact on the operational capabilities of the military.

The models acquired by the Ministry of Defense are the main parachute EPC P / N 304542 and reserve parachute P / N 304561 which are better suited to the new needs of launching from a balloon but the checks were also carried out on the aircraft supplied to the armed forces Italian. The EPC is a modular individual parachute system composed of three classic parts (main back parachute, ventral reserve parachute and armament bag), has a load capacity of 165 kg and gives the possibility to perform jumps at lower heights, with the same level of risk, contributing to the safety of the aircraft by reducing the vulnerability of the paratrooper and the dispersion of the landing.

A hangar to contain the bound balloon that will be used for training launches, replacing military aircraft over time.

The bound aerostat 197 - T is composed of a metal cabin for the transport of paratroopers, of a helium-containing aerostat connected to a cable that allows them to be transported. The system can be operated by skydiver personnel with specific qualifications, it requires a daily inspection of the "gondola" and a check on all electronic sensors, on-board instruments and mechanical parts. After the preliminary operations, we proceed with the unmooring and transport to the launch area. To check the correct functioning of the main, emergency and recovery braking system in the event of a main engine failure, we move on to dynamic tests and then to the military boarding for launches. 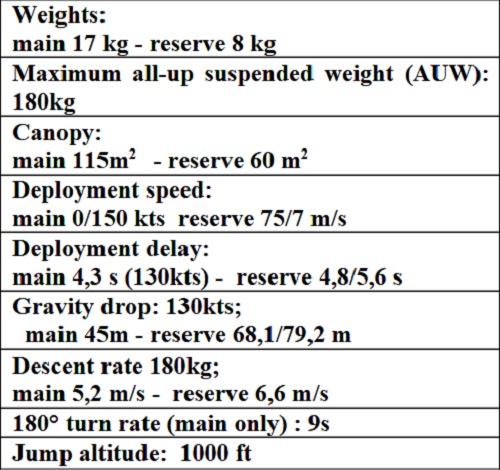 In 2020, Belgium, Germany and the Netherlands decided to jointly purchase a modern automatic parachute system with the primary purpose of improving the interoperability of airborne forces for training and deployment through the use of a shared parachute system. as well as to improve functional safety and performance to adapt low-altitude mass launches to modern requirements.

Germany is acquiring the ECP system as a replacement for the T10 / T10R automatic parachute system introduced in the Bandeswhar in 1957. The Bundesamt für Ausrüstung, Informationstechnik und Nutzung der Bundeswehr (BAAINBw) and the NATO Support and Procurement Agency (NSPA) signed the main procurement contract with Safran Electronics & Defense in February 2021 which also includes the first instructions on the new system by the manufacturer and the industrial storage of spare parts.

The main advantages of the new parachute system compared to the previously used system are a better behavior of the pendulum, a slower descent speed despite a higher load and a better controllable orientation during landing. BAAINBw project manager Dirk May adds that this greatly reduces the risk of injury to soldiers

According to BAAINBw, the main advantages of the new parachute system over the previously used system are a better pendulum behavior, a slower descent speed despite a higher load and a better controllable orientation during landing. The BAAINBW project manager, Dirk May, ensures that the risk of injury to paratroopers will be "significantly reduced" by the EPC system.

The Army has so far been the only stable institution in the whirlwind of economic, political and judicial crises of the...
3866
Read

During the 60s and 70s of the twentieth century, the Shah of Iran, Mohammad Reza Palhavi, taking advantage of the status of ...
1936
Read

The Centauro II 8x8 won the tender for the supply of 98 armored cars to the Brazilian Army. The government of Brasilia had…
8443
Read

“We are constantly looking for ways to test our operational readiness. We protect the UK and are…
3829
Read 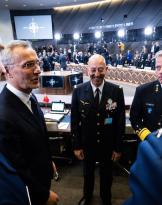 The missiles that caused two victims in Poland yesterday derive, according to the preliminary investigations, from a "mistake...
2245
Read 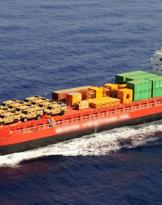 The news leaked about the inspection by the staff belonging to the Irini mission (aimed at ...
2348
Read