Euro 2020: heart-pounding final at Wembley Stadium! The vehicles in the backstage are interesting ... 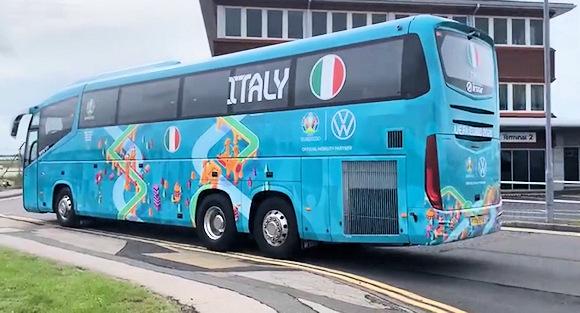 Last night on penalties in the Italy-England Euro 2020 final were endless and electrifying. The Azzurri made it with a 4 to 3 to their opponents. The tricolor is European Champion!

Before the game, observing the backstage of the organization, the shots and the flashes of the media, they also concentrated on a large cavalry of coaches, as usual available to the teams and the numerous health and journalistic technical staffs.

An English public in delirium, also because their last victory in the final dates back to 55 years ago, and at the Wembley Stadium in London there were 58 to support the English national team shouting: "Football is coming home!"

The role of the means

The Iveco bus did not escape the objectives of the reporters Magelys in blue and white livery with the inscription Italy, parked next to a blue VDL bus, and not even the Van Hool Astromega in civil light green color with the English national team on board. Four-leaf clover green is the color of hope and I would like to say that blue is that of victory!

I don't know if there was a superstitious choice of level playing field on the colors of the buses used for the teams or simply a coincidence, however also the national team has been transferred, just think, from a luxurious, albeit standard three-axle IRIZAR I6, rigorously green out of the London society basin City Circle. 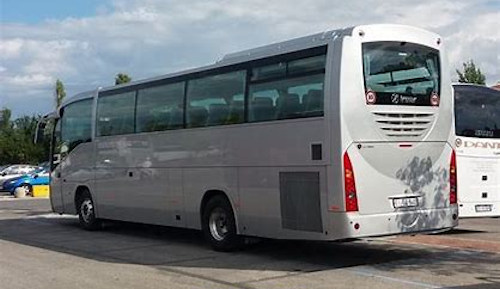 Among other things, IRIZAR is a brand that has been chosen in 34 units also by the Italian Army (photo) and Guardia di Finanza for regimental movements, and the chosen livery is the new and exclusive metallic gray.

On the buses dedicated to transfer services for football teams there is so much to say especially here with us, where the services are designated as being of the highest level and the coach directed to the stadium, passes under escort in predetermined routes and in columns. Any route variables are also calculated to ensure safety and prevent attacks from animated fans. In England, in London, the task of managing the movements of athletes is entrusted to Scotland Yard, which also makes use of private agencies in which various operators come from the British Army.

With a view to modernization and synergy between the military and the specialized civilian sector, a concept that greatly re-evaluates the existence of a logistic reserve - clearly followed by resources - we have in fact seen in other publications as is customary in other States of ' Europe the professional technical interaction with civil professionals, or civilians referred to the service.

MAN, in a military capacity

Il British Army has a large and interesting pool of tactical and logistic vehicles, but it is the MAN brand - since 2011 an integral part of Volkswagen - and Oshkosh that appear most often on Her Majesty's vehicles. 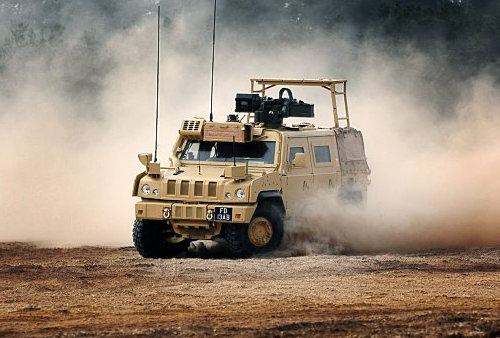 Among these there is also the Panther (photo), British designation of the VTLM Lynx.

The family of logistic technical support vehicles entered service in 2008 as an efficient "workhorse" of the army and at the service of all operational units. The current fleet offers a greater specialist range than previous generation cargo vehicles and can be equipped with armor, communications equipment and ECMs and a 7,62mm machine gun for protection.

For exceptional transport there is Oshkosh

Tanks or heavy equipment are the responsibility of the American brand Oshkosh which guarantees transport in the order of 70 tons.

THE HET - Heavy Equipment Transporter - for example, it is a 4-axle truck that allows quick and economical transfers on the road and with good load distribution, which translates into less wear on the roads, avoiding the use of railway trains and wear of the tracks. Its base is the Oshkosh 1070F 8x8 truck to which a seven-axle semi-trailer can be coupled King Trailer GTS 100.

Its engine is a 18 hp Caterpillar C700 turbocharged diesel.

As previously written, among the supplies of armaments sent by the Italian government, there are also howitzers / ...
3209
Read

Apparently the Army of the Russian Federation is also bringing in the latest versions (dating back to the 80s ...
37740
Read

To circumvent the limitations imposed by Congress, the Biden Administration employs its allies to provide ...
16858
Read

No war can be interpreted and explained through the "absolute" and necessarily abstracting lenses of ...
3445
Read

If it weren't serious, it would even be comical. People don't realize the significance and implications that ...
15651
Read

Reuters reports that the United States will provide Ukrainians with long-range anti-ship missiles. If that were to ...
44219
Read

One of the modern fields of study related to learning is the one known as "serious games". Let's start right away ...
2214
Read

Last month we witnessed the sinking of one or more Ukrainian Neptune anti-ship missiles in the Black Sea ...
36757
Read

The Russian Airborne Forces (Vozdushno-Desantnye Voyska rossii - VDV) - like the vaunted Spetsnaz, by the way ...
28655
Read