Home Military world Means ATC81: too powerful and specialized for ...

ATC81: too powerful and specialized for our roads but the basis for the invincible 190 and Turbostar 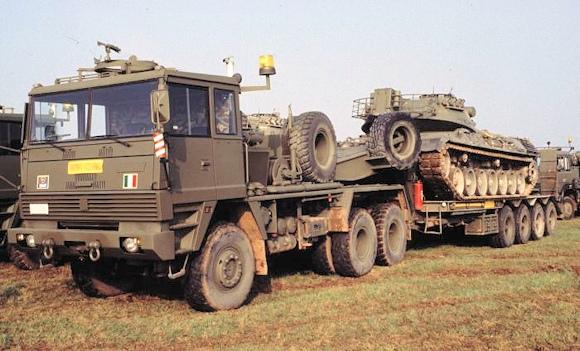 A road tractor born for exceptional transport and able to perform its task even uphill with a total load that could reach eighty tons, and this thanks to its chassis but especially to its mixed transmission.

An icon of the super power in no uncertain terms for the tankers and artillerymen who carried out military service between the years 80 and the two thousand years, when he was replaced by the Astra ACTL SMR 66.40 CAD and from SM 88.50 TIM 8x8.

Little aesthetic, very tall and impressive and with a strictly vertical front, these vehicles were perfectly aligned under the barracks of the barracks and during the two hours of night watch the edge of its bumper seemed suitable to support the RW3 radios worn on the back for a few minutes. Many memories.

The vehicle in question is the Fiat Iveco ATC81 Hydrotrans 6X6, a medium that probably resumed some peculiarities of the Iveco civilian 330F35  (photo below) born two years earlier as a specialist in marble quarries and beyond.

Consider that the Iveco Veicoli Commerciali group was established in the '75 and that at the Fiat defense tender it presented, winning, a prototype derived from the most powerful and robust vehicle present on the European and world market. 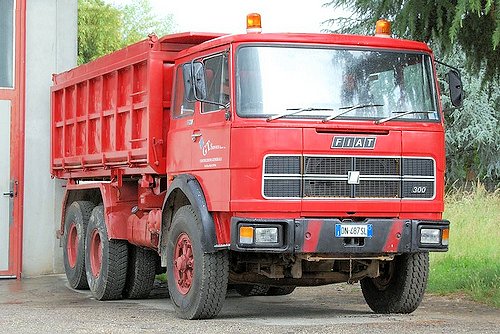 Aesthetically it was very different from the civil derivative, but the main detail that has obscured its excellent features, was its width out of shape, an element that has also hindered its resilience in the market of former military vehicles. In design, probably, we wanted to enlarge it to bring it closer to the width of the Leopard tanks, which transported casually on its semi-trailer.

The news was power, transmission and width

In the barracks he was called "81 Carriage" and to move on public roads, he needed the escort because of its unusual width, and for this reason, when there were no drills, he spent most of his operational life parked in the self-balancers even though he was equipped with features that would allow him to overcome the three million kilometers without problems.

The old code of the road, 32 established in 2.50 meters the maximum width of a vehicle, increased to 2.55 meters with the introduction of the 61 of the new CdS. For this reason the 81 Carriage Truck was to be considered a exceptional vehicle for its width of well 3 meters without counting the opening of the mirrors. More or less like a railway wagon or a bus in service on the airport runways.

The engine. For the traction of this vehicle the most powerful Fiat Iveco engine of the time was adopted, the 8 turbocharged diesel V-cylinder from 17.170 cc, capable of delivering 450 hp to move the tractor and semi-trailer complex - A Bartoletti model TCS 50 BO - consisting of a large joint with an articulated gooseneck on the fifth wheel placed centrally on the frame / floor; the final overall length was about 18 meters. 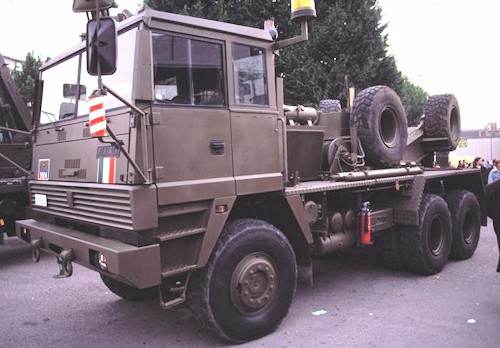 Really a couple out of the ordinary with its 1795 Nm to 1200 rpm, and the same engine weakened to 352 cv was set up on some series of the bus Iveco 370, 8 cylinders, one of the busiest drivers and was a great success .

The main traction was transmitted on the two Magirus rear axles suitably enlarged to adapt to the ATC81 measurements. However mechanically, the torque could be transferred to the front bridge and on all three axes it was possible to act on the differential blocks.

The highlight of this tractor (this is the technical name) was the transmission group, specifically designed to ensure the movement even uphill with total masses of 80 tons and without this leading to the premature wear of the clutch.

The concept was to use hydraulic pressure for starting and moving in critical conditions and then move on to the direct mechanical connection between the engine and the wheels.

How did the transmission take place? In the article on automatic transmission we have known the ingenious "machine" called torque converter or torque multiplier, a system that is partly replaced by robotic double clutch transmissions.

The system allowed the driver of the ATC81 to choose, before departure or even in gear, how to transmit the torque in exchange and subsequently and wheels. 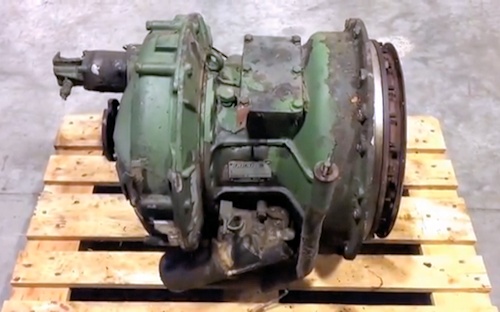 A system actually already known since 1938; he made his appearance on the first American taxis De Soto, Fluid drive e Chrysler, but it was subsequently used also in France with an electro system implemented mounted on the Citroen Ds Shark rather than in Italy on the Fiat 850 Super Idramatic - a rarity - but also on the popular Lancia city buses Esagamma semi-automatic.

The torque converter semis, as it happens today, thanks to an overrunning clutch, could be permanently joined without slippage, but it is not over, in fact the same donut of the converter and clutch assembly, before engaging the gearbox, possessed a second clutch for the direct and definitive connection between engine, gearbox and wheels.

The complex command system Pneumo-hydraulic it allowed starting and driving like a normal mechanical shift, when both clutches were inserted.

In relation to the load and ground conditions, the conductor could exclude the converter block clutch and in this case the engine / wheel junction became hydraulic and semi-automatic ensuring more softness and elasticity to the transmission organs stressed by the powerful 8V Fiat. With this option even its 8 changed or scaled reports transmitted less stress.

In "hydraulic" mode the ATC81 could remain stationary without intervening by pressing the clutch, but using only the brake to hold it back and not let it advance at a crawl. This system, appreciated in traffic, allowed to manually insert a high gear and entrust the hydraulics with the task of leveling torque and efficiency right from the start of the vehicle. For this to happen, it goes without saying that the engines had to own more torque than horses, like the US ones of the time or the diesels. 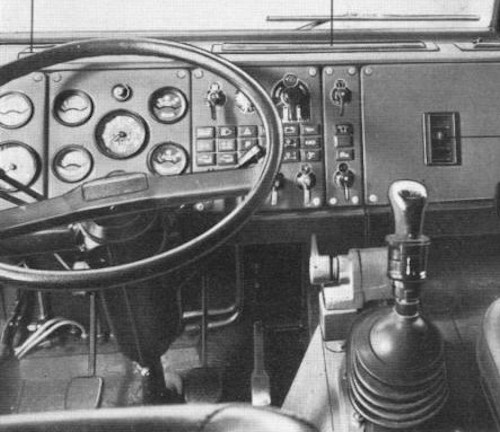 It fitted a synchronized ZF 4S 150 GPA system, with four short gears and as many long inserts with a splitter on the lever, more obviously two reverse gear with the same characteristics. The reduction system was carried out by blocking the surface of a crown with an epicyclic planetary gear inside.

However, there are no technical schemes or information available on the web - in Italy it is quite frequent - It is good to underline that in addition to the engine brake with valve on the exhaust, the ATC81 had a retarder system for slowing down, but it is unclear whether the system acted perhaps intervening on the stator placed inside the converter, or there was even a additional turbine - as it happens today - invested by pressurized oil able to energetically interpose itself to the rotation given by the speed and mass of the vehicle. In any case, the best braking was in manual mode, ie with both clutches inserted.

A system as complex as you can imagine and especially heavy, replaced over the years, even for the Army, with lighter automatic systems as for some versions of ASTRA SM with ZF gearbox and excludable converter.

The characteristics and the reasons for the lack of success

Its chassis was a double T with crossbars and rear leaf spring suspensions while the front had hydraulic telescopic shock absorbers. He could carry three soldiers and a MG machine gun could be installed on the hatch on the roof. 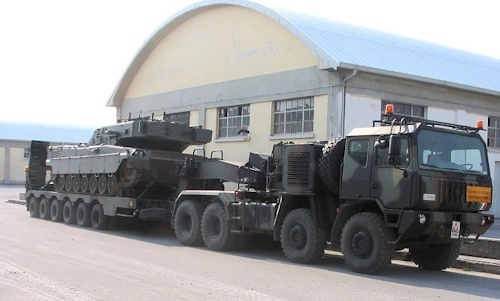 It possessed two winches with a pull of 20 tons and operated by a power take-off at the exit of the engine. The braking system instead was an all-wheel tire - without oil - and it was possible to intervene with a lever in front of the gearbox to anticipate the braking of the trailer. As for the modern Astra (photo), there were two parking stoppers, one for the two rear bridges and a second for locking the front axle.

He was three feet tall, a little bit more than the 70 ACP, and his driving seat was very similar but with more lights than the ACM80. Also interesting was the second emergency pump for the circulating ball drive driven by the movement of the wheels.

Over the years, but the news is not certain, some series were produced with width in outline for the CdS, of 2.55 meters and without the obligation to request the stock for use outside the barracks. Some former conscripts still claim to have led them to the 2005.

Some units of APC81 6X6, was donated in the Middle East to return from the missions, and this probably because in those countries the traffic regulations are less restrictive, while we "used" this vehicle would not have had a useful market, beyond consumption.

FIAT, appreciated in the world

The technical base of the ATC81 has resulted in a historical success with the production of the Iveco 190 and Turbostar. Two memorable trucks and still understandably in the heart of the majority of drivers. Fiat is among the most appreciated automaker's houses on the globe and its managerial efforts have contributed to international public opinion, to associate Italy as the undisputed leader of engines. Fundamental, observing the sales data, the role and leadership of Pierre Lahutte from 2014 at the helm of Iveco CNH Industrial, a world leader in the production of the best heavy vehicles in the world.

Greetings to the boys of the 32 ° regiment wagons "Ferrea mole ferreo cuore" of Tauriano!

In the 25 November 2019 incident, when a Tigre attack helicopter and a Puma transport helicopter collided ...
1878
Read

The head of naval operations, the adm. Mike Gilday and members of the United States Congress, during the Symposium ...
1463
Read 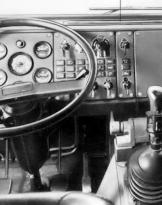 History of the 80-year-old automatic transmission, the traditional most versatile

I had previously talked about automatic transmissions, a reality that also touched the ARs, as we have seen ...
1032
Read

The Minister of the French Armed Forces, Florence Parly, stressed the importance for the Nation of being able to dispose ...
1880
Read

The French forces, framed in Operation Barkhane in Mali, allegedly killed civilians in the course of air raids ...
3066
Read

After Germany, Poland and Italy, Turkey's turn has come to lead the VJTF (Very ...
2455
Read

On December 25, 2020, the Japanese Ministry of Defense (MoD) announced that it would include the purchase cost ...
1566
Read 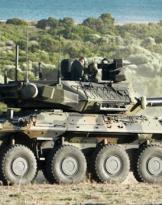 The supply of heavy CENTAURO II 8x8 busses to equip the Cavalry regiments of ...
5001
Read

On December 25, 2020, in Severodvinsk, the Zvezdochka Ship Repair Center, a subsidiary of United Shipbuilding ...
4043
Read