Home Military world The reform of the Russian land instrument

The reform of the Russian land instrument 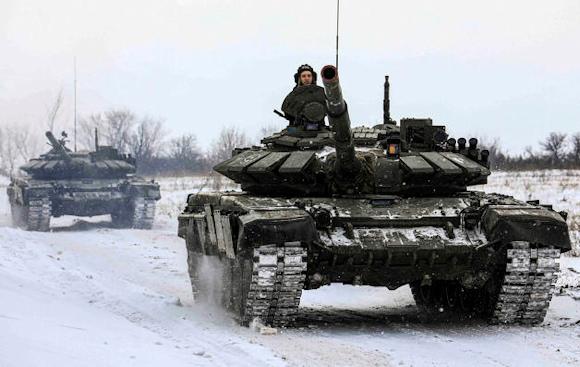 The powerful and efficient land war machine that is now imposing itself in the confrontation in Ukraine is not the result of chance or of a historical military tradition of Russia, but of a clear political-administrative vision and decision that it had and pursued almost 14 years ago.

To better understand the success factors of the Russian terrestrial instrument that lead it, today, to be a hypothetical "Near-peer adversary" of the US Army as often indicated by them in the publications published by the "Army University Press", it is therefore appropriate to retrace the salient points that led to the creation of this effective tool.

In 2008, following the enormous management and employment problems encountered both in the 1st and 2nd Chechnya War, (especially the last not particularly happy for the Putin administration) the current Russian Federation decided to implement the greatest reform of the terrestrial military instrument and of the entire defense of the last century ("Novyj Oblik" - "New look"), passing from a mammoth and unprofessional (very corrupt) organizational system inherited from the now dissolved Soviet Union to a 'organization decidedly leaner, professional and efficient, which to date, according to the successes in the theaters in which it has been used (Syria, Crimea and perhaps Ukraine), appears to be the privileged instrument of the Russian administration for what concerns the pursuit of its objectives of foreign policy. 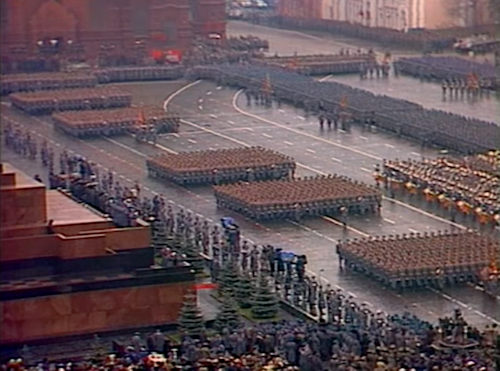 If we wanted to quantify the extent of this reform merely numerically, just think that at the beginning of the 90's the Russian army was composed of an effective force of about 5.000.0000 units (mainly active conscripts on a two-year basis) divided into 1890 large elementary units (divisions) while today it can count on an effective force of about sun 755.000 units (of which 255.000 conscripts and 500.000 graduates / non-commissioned officers in semi-permanent service and officers) divided into just 172 large units.

But this reform, which is still partially in progress, has not only involved the quantitative aspect but has reformed the terrestrial instrument at 360 °, in some ways (very few from the doctrinal point of view and many from the managerial-financial-organizational point of view ) westernizing it.

In just a few years starting from 2008, therefore, we worked together on 4 different levels:

"Personal" - completely revising the enlistment policy, passing from an army of conscripts on a two-year standstill to a hybrid recruiting army (35% conscript and 75% in permanent / semi-permanent service) with the creation of a new category, that of non-commissioned officers / graduates with predetermined contracts (from 2/6/10 years), who have become the real backbone of the new Russian army, highly specialized in their own positions (rarely transferable or requalifiable) almost never hold any command position (as per Soviet tradition ). 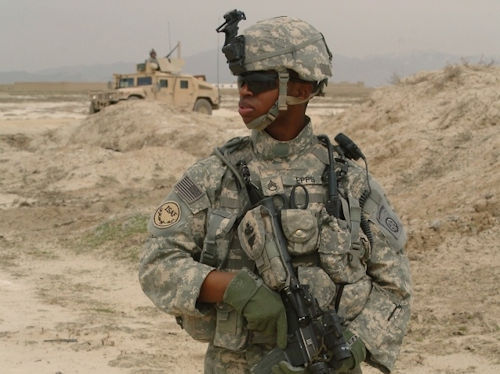 In fact, the Russians, during the 2000s, carefully analyzed the widespread leadership model used by Western armies and decided not to adopt it, leaving the burden of command (at all levels), only to the officers category, which although considerably reduced, it is still, in percentage terms, decidedly impressive if compared to the western counterparts. Suffice it to say that currently in the Russian army alone there are as many as 10 academies for officers and the most inflated degree, that of lieutenant, has about 40.000 units.

Therefore, figures such as staff sergeant (Photo) American or the marshal Italians are completely absent and the little that had been created since the fall of the Soviet Union in the early 2000s has been totally canceled with this reform.

"Ordinary rearrangement and constitution of forces" - it was decided to significantly shorten the chain of command and control, passing from a 4-degree chain (military district, army, division, regiment) to a 3-degree chain (strategic operational command, army group, brigade), identifying a coma large basic unit the brigade rather than the division (thus becoming a "brigade-centric" system), abolishing the regimental dimension and favoring the use of battalions only, not intended as units but as sub-units having their own logic only at interior of the brigade. Brigades that in fact, like the graduates / non-commissioned officers on contract, are the backbone of the “Novyj Oblik” reform as regards the order re-articulation. 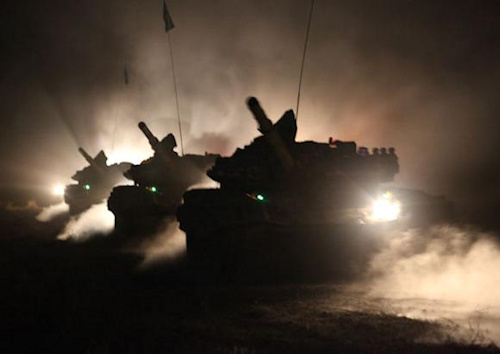 Although since the 2nd World War the Russians have always been very attentive to the so-called "combined-arms" concept with the establishment of these new ordering units (army / brigade group) they have definitely exceeded each other, leaving, almost constant, a numerical ratio of 3 combat support units (between land artillery, anti-aircraft artillery, engineers, NBC, etc.) for each maneuvering unit present on the ground (infantry / tanks). Therefore, to date, a (type) Russian maneuver brigade, such as those that are moving in Ukrainian territory, probably consists of only 4 maneuvering sub-units (3 tank battalions and 1 infantry battalion if the brigade is armored or l 'inverse if it is motorized) but with 12 combat support sub-units (usually 3 artillery groups of which 1 MLRS, 2 anti-aircraft artillery groups, 1 engineering battalion, 1 NBC company, 1 exploration battalion , 1 target acquisition battalion and 1 sharpshooter company) for a total of about 5.000 men. A balance of forces between maneuvering units and combat support that at the moment has no equal in the Western field and which allows the Russian maneuver brigades to be completely autonomous.

The transition to the brigade-centric structure, therefore, has not only simplified the command and control system, making it more suited to operational needs. it has also "deflated" (see the drastic reduction of large units from 1890 to 172) a system of controls that is now saturated and ineffective, thus releasing a large amount of funds that have been diverted to updating the equipment and the vehicle fleet , as well as for research and technological development in the defense field. 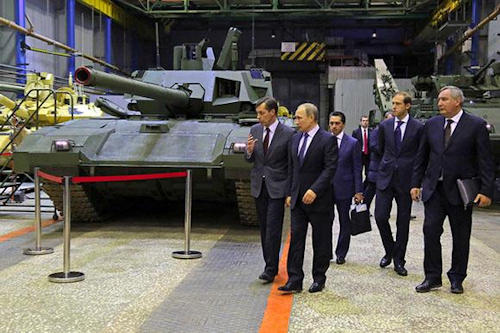 "Regeneration of the vehicle-material fleet and constant technological development" - thanks to the funds obtained from the order reorganization and having inherited an impressive quantity of material, albeit obsolete, from the former Soviet Union, the administration decided to gradually renew the entire fleet of vehicles and weapon systems.

Unlike the Western approach, however, the Russian one envisaged a progressive renewal (thanks to the many development projects) at the same time as a constant "upgrade" of the means and materials already supplied (with a minimum of divestments). An example above all, from this point of view, is the situation within the tank battalions where, despite the fact that there are currently 4 different types of MBTs (T72 - T80 - T90 - T14) and work is underway on the massive entry into line of the futuristic T-14 (son of a virtuous development program), the bulk of the Russian fleet is still made up of the T-72Bs which, instead of being progressively decommissioned, in recent years, have been the subject of "an update ”Thus becoming the T-72B3s, which thanks to their approximately 1.000 units in active service, turn out to be the real backbone of the Russian armored forces.

This approach has therefore made it possible to keep the level of the weapon system / vehicle / aircraft fleet always very high, avoiding any hysteresis due to a massive and contemporary renewal, as often happens in the West. 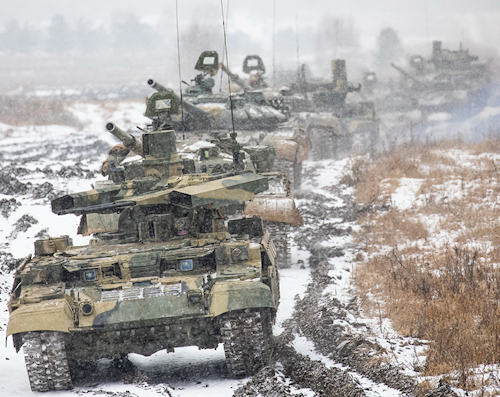 "Doctrine and Training" - following the personnel reform, ordering levels and the introduction of new weapon systems (just think of UAVs or GMLRS) and the generation of new dimensions of combat (the cyber one above all), there has also been a considerable doctrinal adaptation, which has very little in common with the Western one (flawed by the 20 war on terrorism). From a doctrinal point of view, in fact, mainly the Russians have borrowed most of the historical principles of the Soviet doctrine (the most empirical and experiential of all), updating and modernizing them on the basis of plausible future contexts of use, and operating the generation of completely new doctrines for contexts not yet foreseen, just think of the excellent work done in the field ofHybrid Warfare where to date the Russians are the undisputed leaders.

As far as training is concerned, however, as the reform was bearing fruit this (almost never simulated by means of digital devices) was significantly increased and encouraged under a perspective of total development of the "combined arms" capacity and strategic projection. An emblematic example of this latter feature is the practice that provides that if an infantry battalion has to take part in a standard-routine brigade-level training activity, it is forced to travel no less than 1000 km, in full logistical autonomy, before to be able to unfold and conduct the tactical act.

A medium-term strategic vision, therefore, that the Russian Federation had the strength and the will to realize in a very short time, with extreme success.

References used for the writing of the article.

After the decommissioning of the M551 Sheridan tank, which took place in the mid-90s of the last century, the US Army ...
13898
Read

The director of the Kredmash mechanical plant in Kremenchuk would have confirmed (source Komsomol'skaja Pravda) that ...
6533
Read

On June 6, with two separate ceremonies at the Fort Wainwright and Elmendorf-Richardson bases, she was reactivated in ...
8598
Read

For a long time, Difesa Online has emphasized the importance of acquiring (and maintaining) artillery pieces, monotube and ...
22158
Read

British Army Chief of Staff Sir Patrick Sanders says the invasion of Ukraine by the ...
12186
Read

During the last world war the Panzerkampfwagen V Panther, having solved the initial mechanical problems, was ...
27289
Read