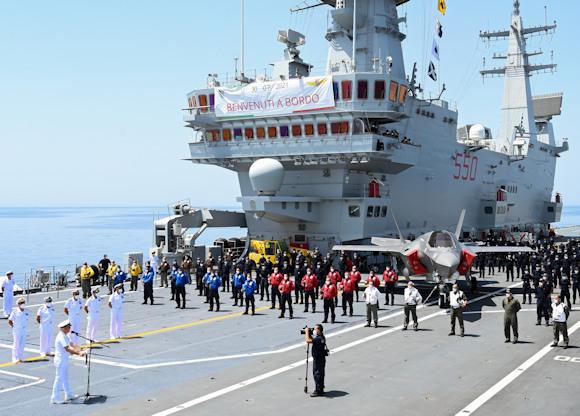 Friday 30 July 2021 will remain a historic day in the evolution process of the air component of the Italian Navy with the fitting of the F-35B (BL-4) 4-03, piloted by the lieutenant captain Brambilla commander of GRUPAER, aboard the ship Cavour coming directly from the FACO of Cameri with the supply of a pair of AV-8Bs.

The arrival of Lightning II on Cavour will allow the start of the training and familiarization of pilots on the new machine in aircraft carrier operations in order to achieve the Carrier Qualification.

"... the first landing of an aircraft like the F 35 is a historic moment - comments Commander Brambilla - which will allow the Armed Force to project itself towards the future forty years and future challenges. "

Il Cavour and his crew have already had experience with the US Marine Corps F-35Bs during sea trials conducted in the Atlantic Ocean off the east coast of the United States. Countryside Ready For Operations saw over 50 flight missions take place, in different weather conditions and sea conditions, night activities, about 120 vertical landings and as many short take-offs with the help of the ski jump, as well as vertical take-off tests.

The RFO required an enormous commitment to integration and standardization of the Italian-American teams fully engaged in achieving the tasks of the various operations starting from the flight deck, passing through the aircraft carrier hangars to the operational premises of the core unit of the activities. of flight. 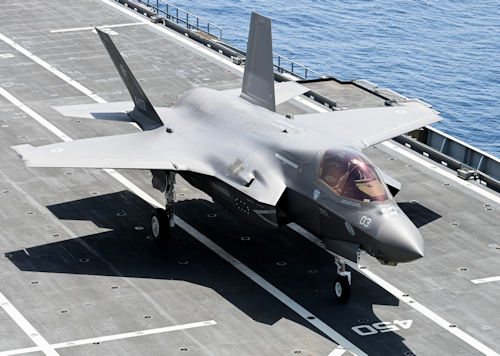 "I am extremely proud of the result that the aircraft carrier has achieved and grateful for what the men and women of my crew have done since the January departure to the United States for the Ready For Operation Campaign, now a cycle is effectively closed with the arrival of the F-35B aboard the aircraft carrier, the Navy really makes an epochal leap ... " says the commander of the aircraft carrier Cavour ship captain Ciappina.

While looking and thinking about the future with a target of 2028, the year in which the delivery of the 15 F-35Bs will be completed Wolves the same year, if not already in 2024, will mark the conclusion of the AV-8B experience with the Navy, a story that began on 7 June 1991 with the delivery of the first two TAV-8Bs aboard the Garibaldi moored in the port of Norfolk (Virginia). One of the two specimens, on 23 August 1991 during the official celebrations, was taken over by the then corvette captain Cavo Dragone today admiral of the naval team and chief of staff of the Navy who welcomed the new aircraft off Taranto.

During their career, the AV-8B Harrier II + of GRUPAER have participated in some of the most important off-air missions that have seen our country involved since 1995 with the operation Ibis III in Somalia, thus becoming the first user nation to use it in real missions. They followed up the operations in the Balkan Peninsula first with the operation Alba in 1997 in Albania and later in 1999 the operation Allied Force of NATO in Kosovo where i "Wolves" they carried out 30 sorties with guided and unguided ground attack weapons.

Following the attacks of 11 September 2001, the planes aboard the Garibaldi, they sailed for the Indian Ocean where they took part in the operation Active Endeavor carrying out support and interdiction missions in Afghan territory for a total of 288 missions until March 1, 2002. 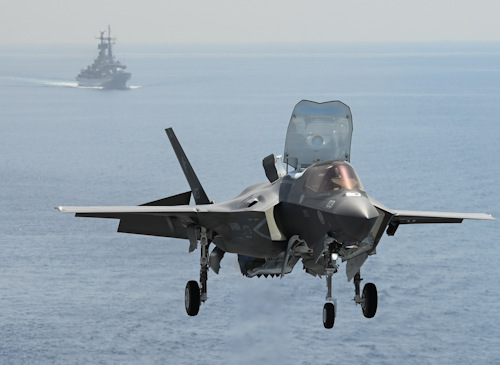 In 2006 it was the turn of the participation in support of the operation Leonte in Lebanon where operating from Nave Garibaldi they carried out reconnaissance and surveillance missions of maritime traffic. The most recent NATO operation concludes the list Unified Protector over Libya which saw the Navy planes engaged in missions of Combat Air Patrol aimed at protecting the No-Fly Zone established by United Nations resolutions 1970 and 1973.

In recent years, many doubts have arisen about the low number of F-35Bs (15) purchased by the Navy. However it should be noted that the aircraft carrier Cavour it has a displacement of about 27.000 tons, therefore capable of embarking a number of aircraft (including helicopters for various tasks) of just over twenty.

In practice, the Navy has an aircraft carrier only on paper, in the sense that the Cavour is more of a helicopter carrier with possibilities, thanks to the ski jump, to be able to take off STOVL aircraft. Furthermore, the embarked F-35Bs will mainly have the task of providing aerial protection to the naval group, as they will only be able to take off with air-to-air armament (version B does not have the 4-barrel 25 mm rotating cannon) and a load minimum of LGB bombs. To give an example, fighters embarked on future Chinese 80.000-ton conventional aircraft carriers will have the same problem, as they will not have the energy produced by nuclear propulsion to deliver enough steam for the catapults.

After the decommissioning of the M551 Sheridan tank, which took place in the mid-90s of the last century, the US Army ...
12989
Read

The director of the Kredmash mechanical plant in Kremenchuk would have confirmed (source Komsomol'skaja Pravda) that ...
6339
Read

For a long time, Difesa Online has emphasized the importance of acquiring (and maintaining) artillery pieces, monotube and ...
22086
Read

British Army Chief of Staff Sir Patrick Sanders says the invasion of Ukraine by the ...
12088
Read

During the last world war the Panzerkampfwagen V Panther, having solved the initial mechanical problems, was ...
27237
Read