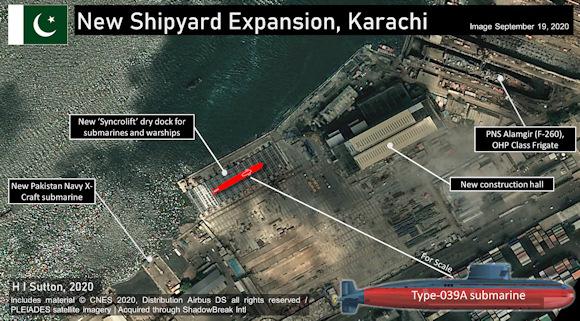 From the photos from the passage of the satellite PLEIADES on Karachi on 19 September it is possible to observe important expansion works of the shipyards which include the construction of new warehouses with construction systems and a dry dock of type Syncrolift capable of accommodating Type 039B diesel-electric submarines (Hangor Class) that the first boat will enter service by 2022, but also host type A (Yuan Class) of the Chinese PLAN with which Pakistan has strong military collaboration relations.

- Hangor class 4 boats will be built in China by the China Shipbuilding Industry Corporation (CSIC) and at the same time another 4 boats in Pakistan at the Karachi Shipyard & Engineering Works (KSEW) with delivery of the first batch by 2023 and total delivery by 2028.

Following the $ 5 billion contract finalized in October 2015, construction work began on the aforementioned structures, in particular the dry dock appeared in 2016 and appears to be a Syncrolift of Norwegian construction 126 meters long by 32 meters wide with lifting capacity up to 7881 tons that allows its use not only by future Hangor Class (3500t) but also by frigates Zulfiquar Class (Type 053H3 3,144t), Type 054AP (4100t), e Jinnah Class (3200t). The commonality of weapon systems and consequently logistics make Pakistan an important base of support for Beijing and for its global designs embodied by the Silk Way, thus giving ample scope to operations in the Indian Ocean and in the Horn of Africa together with the based in Djibouti.

The Type 039Bs allow KSEW to acquire knowledge on the Stirling type AIP system supplied on these boats and with the decommissioning of Agosta-90B definitively retire the French AIP system MESMA. Furthermore, the Hangor they will combine Chinese technologies and weapons systems with equivalent indigenous products of Islamabad, in particular the cruise missile Babur-3 capable of hitting a target of up to 450km and can be armed with nuclear charge, this weapon system is already tested on an Agosta-90B for the first time in January 2017.

Asphalt paving of the capitoline streets and garbage are among the most recent organizational emergencies where - without embarrassment ...
1032
Read

According to a press release from the Nerpa shipyard in Snežnogorsk, later confirmed by TASS, to ...
1384
Read

Despite continuing with the update program of the Aries tank, the Army General Staff arises ...
6550
Read

On 15 October the first fleet of 18 ACVs (the amphibious armored vehicle produced by BAE Systems in ...
9764
Read

Egypt would have signed, in August, for the sum of 1,2 billion euros, the order for two multi-mission frigates (...
9145
Read