Home Military world Col Moschin is looking for a new ... 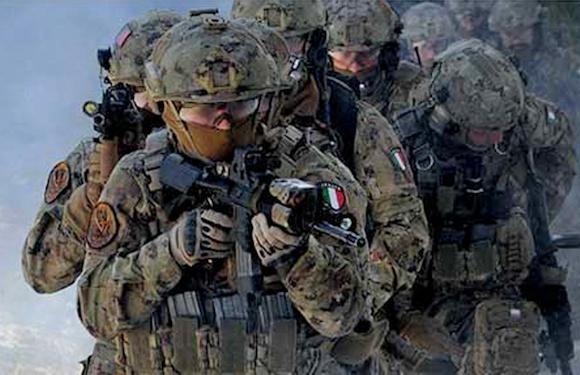 When the raiders of the Nono they arrived in Mogadishu in December 1992 - as part of the multinational operation Ibis. - the first examples of the Beretta SCP-70/90 assault rifle in 5,56x45 NATO caliber arrived very recently (a few months later they would also be distributed to the other departments of the thunderbolt), version with short barrel and folding stock of the AR-70/90. Heavy and excessively angular (despite being a sturdy and precise weapon), it had suffered from the long design period and was ill suited to the needs of a special department.

Then, the Army raiders set out in search of a rifle that best suited their needs, relying on a flexibility about the adoption of new weapons unknown to conventional departments.

In 1995, the Austrian Steyr AUG, a rifle, was adopted bullpup with fixed lens. A peculiar feature of the weapon is the adoption of a transparent plastic magazine that allows you to see the remaining shots.

However, the Steyr could only be a buffer solution, in fact at the beginning of the new millennium, following the choices of the American Special Forces and the GOI of the Navy, the Nono decided to adopt the Colt M-4A1 rifle caliber 5,56x45 mm NATO, the result of the development of the CAR-15 rifle of the 60s.

Over the past 15 years, the M-4 platform has undergone further development, becoming the departure base for new rifles from various arms manufacturers (such as the HK-416 from Heckler & Koch).

Also in recent years, the Department has had the opportunity to experiment with new weapon systems, such as the FN SCAR (both in caliber 5,56x45 mm and 7,62x51 mm) as well as actively participate in the development of the Beretta ARX-160A2 rifle - version for forces special, derived from the ARX-160A1 -, currently employed by the 4th rgt ranger Monte Cervino and from the RRAO.

When it would seem, the Nono together with an unspecified Italian company in the sector (perhaps Beretta), it is developing a new specific rifle for use by special forces.

The new weapon (therefore completely different from the ARX-160A2) should have a similar conformation and functionality to the Colt M-4A1 rifle, but with a higher modularity and operating system gas piston.

As for some features, the new iron . craft . Nono, should weigh, empty, less than 3 kg (making extensive use of polymeric materials), have a T-Handle cocking lever, quick barrel replacement (ARX model), telescopic and folding stock.

The new rifle will be calibrated with the usual 5,56x45 mm (despite the poor ballistic performance offered by this ammunition in operating theaters in recent years), but with the possibility of being converted into .300 AAC ammunition Blackout (7,62x35 mm) the same length as the NATO standard shot, but with superior performance.

This year's Eurosatory was to be the place chosen to show the public the new weapon, the pandemic events, as known, have canceled this event. We will probably have the opportunity to see it in the next edition.

Asphalt paving of the capitoline streets and garbage are among the most recent organizational emergencies where - without embarrassment ...
1014
Read

According to a press release from the Nerpa shipyard in Snežnogorsk, later confirmed by TASS, to ...
1375
Read

Despite continuing with the update program of the Aries tank, the Army General Staff arises ...
6530
Read

On 15 October the first fleet of 18 ACVs (the amphibious armored vehicle produced by BAE Systems in ...
9738
Read

Egypt would have signed, in August, for the sum of 1,2 billion euros, the order for two multi-mission frigates (...
9133
Read