Home Military world The Marines land in the "Italian" 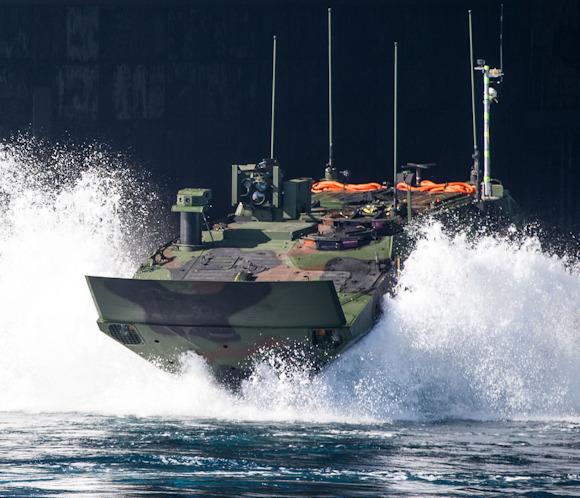 On 15 October, the first fleet of 18 ACVs (the amphibious armored vehicle produced by BAE Systems in collaboration with IVECO) was delivered to a rifle platoon of the United States Marine Corps.

The search for a means by the Marines to replace the AAV-7A1 had begun in the second half of the 90s of the last century. Initially, it seemed that a possible solution would go through the adoption of the General Dynamics platform, a tracked vehicle called the EFV (Expeditionary Fighting Vehicle) which, according to the requests of the Marines, would have to move from the ship to the beach at a speed of 20 knots. However, design difficulties and rising costs led to the abandonment of the EFV program.

The Marines then set about looking for another medium, as the AAV-7A1s became increasingly obsolete and not usable in future operational scenarios.

At the same time, the American strategy was increasingly orienting itself towards the Pacific, and the Marine Corps, as has often happened in their history, models tactics and means for the future scenarios in which it will have to be engaged. Therefore, there was the need to have a light vehicle, on wheels, with light logistics but which at the same time guaranteed a certain degree of protection to the personnel being transported.

After five years of in-depth testing, the Marine Corps chose the IVECO SuperAv, resulting in 2018 winner of the ACV 1.1 program.

The hesitations towards a rotated vehicle were overcome thanks to the brilliant behavior of the SuperAv in the tests to which the Marines subjected it.

Tests conducted by the NETT (New Equipment Training Team) team in collaboration with BAE and IVECO technicians have demonstrated the reliability of the vehicle even in very rough seas (state 4.1). In these conditions, the ACV showed much higher performance than the old AAV-7A1.

The excellent performance in navigation (even in strong winds) as well as in the operations of descent into the water and of returning to the landing ship, apparently, have greatly impressed the personnel of the Marines.

The American military device, in recent years, is undergoing a profound restructuring in order to face ...
1799
Read

The fast multi-role vessel Project 02510 entered service on November 24 with the Baltic Fleet of the ...
1968
Read

The IRINI mission - launched last year by the European Union to support the UN embargo, aimed at blocking the ...
3518
Read

The hull of the icebreaker ship Evpatiy Kolovrat, the class leader of Project 21180M, was set up at Almaz ...
864
Read

Only 5 years ago the Turkish press was promoting the new ALTAY national battle tank as the most modern MBT in existence ...
3652
Read

According to a press release released on November 23, 2020, Huntington Ingalls Industries Shipyards have ...
1006
Read

After 48 years to protect the skies of Japan on November 20 they were officially withdrawn from service ...
1480
Read