Home Military world The equipment of the Azerbaijani armed forces

The equipment of the Azerbaijani armed forces 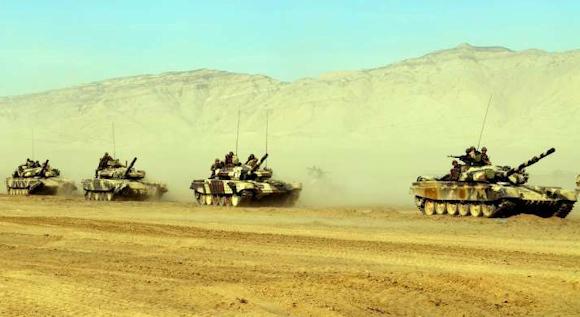 Over the years, Baku's armed forces have been updated with modern materials thanks to the proceeds of natural resources, of which the country is rich, implementing partnerships with Western nations, in particular with Israel, Turkey, South Africa and Canada, without neglecting the technologies Made in Russia.

The Army is the leading component of the national armed forces and is equipped with a hundred modern T-90S tanks on which there is an option, to be exercised, for a further hundred machines, alongside them are in service a few hundred T- 72 Lion, these upgraded tanks from the Israeli Elbit Systems feature improvements in fire control and electronic systems as well as being equipped with GPS / INS navigation system and responsive modular armor.

Next to the Main Battle Tanks there is an important armored component being updated which sees the presence of the first of the 50 Mowag Piranha v in order, which are flanked by about ninety BMP-3Ms equipped with a thermal chamber Vesna-K and about thirty BMP-2Ms updated by the Elbit System. In addition, there is an important number of troop transport vehicles of the BTR family (80A, 82 and 70), specifically the BTR-70 version has been updated locally by the Ministry of Defense Industry of Azerbaijan with the turret Shimshek equipped with fire control and thermal vision. In addition, the Azerbaijani army is in possession of several light armored vehicles developed through collaborations at home or built under license such as the AZCAN Sentry e Huron, the Paramount Group Marauder, Matador e ILDIRIM, in addition to the Otokar Turks Cobra e ZPT and the Israelis AIL Storm, Abir and Plasan Sand Cat. 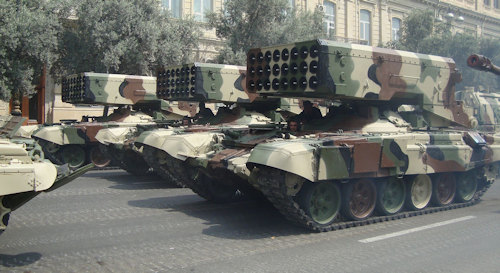 As regards the missile and artillery component, various types of tactical ballistic missiles are present in the workforce, starting with fifty Israeli missile launchers. LORA with a range of up to 400km, flanked by the twenty TRG-300 systems Kaplan of Turkish manufacture, ten Polonez Belarusians and some OTR-21s Tochka. Some uncertainty, however, about the numbers of MLRS systems in service, but an average of at least twenty launchers per type is estimated, starting from Israel Military Industries systems on Kamaz 8x8 hull Lynx e Extras, the Czechs RM-70 Vampire, the Rocketsan T-122 Sakarya always on Kamaz hull and the Russian BM-30 Smerch, TOS-1A Buratino and BM-21 City. Alongside these vehicles there is a large component of self-propelled artillery that sees a massive presence of Berth 152mm and 2S1 Gvozdika, flanked by 5 specimens of the modern ATMOS 2000 and a few dozen for each Soviet-era weapon system: 2S19 Msta, 2S7 pawn, 2S3 Akatsiya. In addition to these systems, the Azerbaijani army is equipped with the unmanned combat air vehicle IAI Harop, a suicide drone optimized for SEAD missions, which is equipped with an explosive head that is activated in contact with the target, destroying the chosen target. , typically SAM defense systems.

Azerbaijani Air and Defense Force, on the other hand, has a greater degree of aging of the material in its equipment a dozen Mig 29C fighters Fulcrum purchased in 2007 from the depots of various ex-USSR countries (Russian Federation, Belarus and Ukraine) they were reconditioned at the Odessa workshops and operate from the Nasosnaya air base, which are flanked by as many Su 25K bombers Scorpion, purchased from Georgia in 2002, in service at Kyurdamir air base. In recent times, the Baku government has evaluated the purchase of a new multi-role aircraft, paying particular attention to the Sino-Pakistani JF 17 Thunder even if the arrival of the Sukhoi Su 30SM in Yerevan has shifted Azerbaijani attention to Mig 35 and Su 35 for which negotiations have been underway for some months, while the training and light attack line, in light of the letter of intent signed in Rome last February, it will probably be made up of 24 Leonardo M-346 / 346FA Master. The rotary wing consists of the traditional Mil 24/35 (17 specimens) and 65 Mil 8/17 helicopters based in Qala near the country's capital. There are also some IAI drones Hermes 450 e 900, IAI Heron, IAI Searcher in addition to Orbit e Aerostar of which Azerbaijan has the production license. Finally, land air defense is guaranteed by two battalions of S-300PMU-2 Favorite, 9K37 mobile systems Buk-1M and manpads Igla-S.

Asphalt paving of the capitoline streets and garbage are among the most recent organizational emergencies where - without embarrassment ...
1027
Read

Despite continuing with the update program of the Aries tank, the Army General Staff arises ...
6540
Read

The war between Armenia and Azerbaijan is highlighting the role of UAVs (Remotely Piloted Aircraft) in a ...
4385
Read