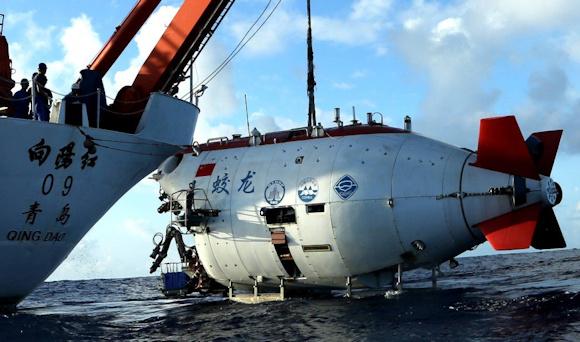 The policy of Beijing, as we have repeatedly discussed on these pages, also passes through the development of a maritime power understood as an instrument of projection of force capable of protecting the growing global interests.

It is no wonder, therefore, that in recent years a considerable part of the efforts and resources of the Chinese scientific community have been directed towards achieving significant naval operational capabilities to operate not only on the surface but also in depth.

In this context, Chinese research and successes in the field of unmanned underwater vehicles (UUVs) are very interesting.

A year ago, a UUV-'Hailong 11000, Also known as Sea Dragon - immersed in the northwestern Pacific Ocean reaching the depth of 5630 meters1, never reached before by any other Chinese boat.

A success followed by another drone, theHaixing 6000, descended to 6611 m.

Already in the past this headline, particularly attentive to what happens in the Middle earth, had given news2 of the building at 5 km of depth, of the first Chinese base for ocean drones, whose progress proceeds hand in hand with the production of a new series of large unmanned submarines (extra-large unmanned underwater vehicles, XLUUV), operational since the early months of the 2020, which, with artificial intelligence, will be able to perform a variety of missions, also of a military nature.

Therefore, in such a scenario, the latest developments of the Chinese submarine program reported by SCMP a few days ago are not surprising3.

Beijing, with funds from the Ministry of Science and Technology allocated from the 2017, would currently be working at a new submersible robot able to move in water with extreme speed.

According to the Hong Kong newspaper website, the prototype, in the shape of a cigar along 9 meters, has a bow drive system, a rudder used by jets and a stern propeller.

Equipped with two stabilizers that will house the batteries and two propellers, the drone will be able to reach the speed of 10 nodes and dive to a depth of 1.000 meters (3.281 feet) with a rate of about three meters per second in about 5 minutes (the same applies to the ascent).

The submarine will be powered by conventional batteries or a chemical engine that mixes lithium and sulfur hexafluoride to produce heated steam: an energy source often used in torpedoes for electric generators.

Energy - according to the article - was one of the main problems faced to overcome the resistance opposed to the density of water.

Liu Kaizhou, head of the project developed at the Shenyang Automation Institute in Liaoning Province, told the South China Morning Post that the prototype developed has great potential as it can "Maneuvering fast and free in the water just like an airplane in the air".

Furthermore, there are numerous communications and surveillance equipment on board the spreader, which would be ready to perform "The first open sea test in about a year".

If at present its use refers essentially to search and rescue operations at sea, to the collection of naval information, to the mapping of the seabed and to the transport of minerals from the seabed to the surface, the possible implications in the military field are evident.

Liu Kaizhou - who is also working on the autopilot project that will allow the Jiaolong to reach depths greater than 7000 meters (23.000 feet) - stated that the tests carried out to date on the prototype have made numerous innovations possible, including the use of air bubbles to cover the whole bathyscaphe in order to reduce friction.

"This technology is brand new" he said, "we are in new and unexplored waters, excited about the challenge we face".

Last note: some of the experiments of Chinese UUVs were conducted not far from the island of GUAM, a US outpost in the Pacific Ocean.

After the suspension of the German KSK for pro-Nazi sympathies, it is the turn of the prestigious 22nd SAS regiment (Special ...
3745
Read

In recent years there has been a resurgence of the piracy phenomenon in the Gulf of Guinea, in the part ...
3095
Read

Throughout the period of the Cold War and up to the present day, the series of assault rifles (including models ...
1962
Read

Although the Aviation with the Star of David (Heyl Ha'Avir) is completing the acquisition of the 5th fighter ...
4629
Read

The concept of hegemony has a complex history but also a pressing topicality, not only in terms of theories ...
2448
Read

In an official note of 21 July, the Honorable Matteo Perego of Cremnago, member of the Defense Commission of ...
3080
Read

On July 12, the IAF (Israeli Air Force) activated a new flock of special forces. The 7th flock will encompass the ...
6118
Read

The Turkish government's decision to make the Hagia Sophia a mosque is part of the process of ...
3740
Read