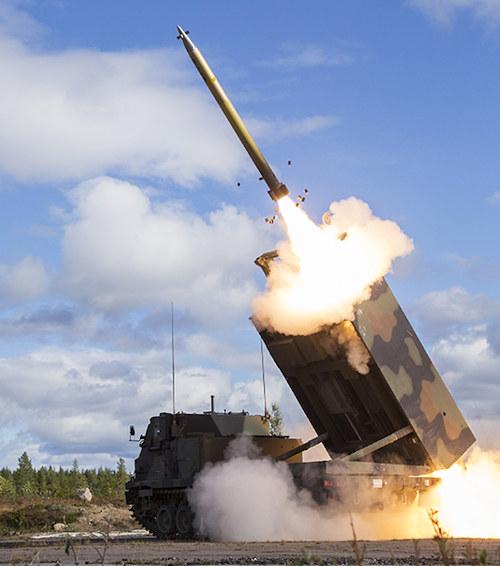 The M-26 was the first rocket to equip the MLRS, deployed in 1983 is an unguided device, with a maximum range of 32 km and a warhead containing 644 M-77 submunitions. A salvo of 12 rockets would be able to saturate an area between 120.000 and 200.000 m². The subsequent development was characterized by the M-26A1 / A2 rockets with greater ranges, through the introduction of a larger motor rocket, with greater amount of propellant (maximum range of 45 km). The A1 version is equipped with the M-85 submunitions equipped with a fuze for self-destruction, in order to reduce the risk of any collateral damage.

Subsequent developments led to the M-30, a guided rocket whose development was attended by the US, France, Germany, the UK and Italy. Credited with a maximum range of 60 km (the warhead contains 404 M-77) it is equipped with a steering kit comprising a GPS antenna and an inertial measurement unit integrated on the rocket body. The M-30 rockets were first used in 2003 during the invasion of Iraq.

In May, the process relating to the parliamentary examination of the armaments acquisition program of interest to the Army concerning the updating of the MLRS was concluded (the cost for the entire update of the self-propelled machines is estimated at 418 million euros) . Lockheed Martin will be in charge of procuring the new GMLRS-ER guided rockets which are expected to go into production starting next year.

The new GPS-guided rocket has a maximum range of 150 km and will significantly implement the capabilities of the Italian artillery, which for many years has received little attention in terms of updating programs and the acquisition of new guns.

A Pakistani court has summoned the heads of all past and current governments, including the former military governor ...
597
Read

The experience gained on the ground, in the last two decades, by the Italian military personnel engaged in the missions ...
12872
Read

After the decommissioning of the M551 Sheridan tank, which took place in the mid-90s of the last century, the US Army ...
16400
Read